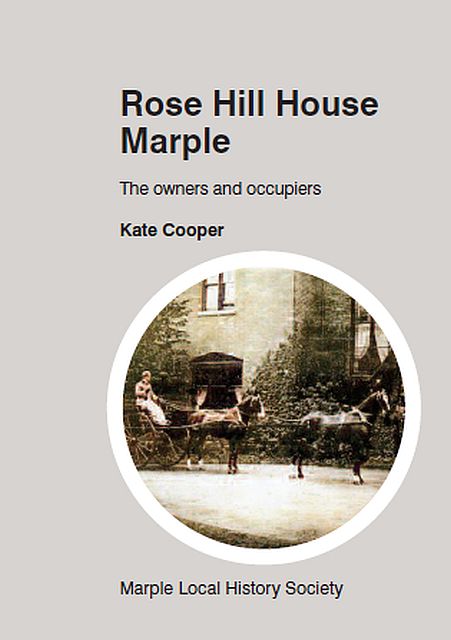 Introduction to 2020 edition
Kate Cooper’s book has served us well in the generation since it was written. As well as giving us an insight into an aspect of Marple that was unresearched before then it has also sold steadily over the years and given many people an additional background to their own knowledge of this locality.

When we came to the end of our stock of books we tried to contact Kate to arrange a second edition. Unfortunately, with the passage of time, we have lost contact with her and have not been able to get in touch.

The book is too good to allow it to lapse so we have produced this new edition. The text is exactly as originally written but we have taken the liberty of adding new census information and additional photographs that have become available since the original publication. We are sure she would not mind and the book remains a tribute to her work and scholarship.

The Drive in Rose Hill is a road leading to a housing estate and is indistinguishable from many other suburban roads except, perhaps, by the fact that it has no other name. This in itself is a little out of the ordinary, as if a greater significance had once been attached to it.

At first glance, this would appear unlikely; and even in the 1940s, before the housing estate was built, a passer-by would have seen merely a wide, unsurfaced lane with no street lights and without even a road sign for identification. This lane, branching off into fields on the south side of the main road to Marple just east of Marple’s Rose Hill Station, gave access to five modest though individual new houses, arranged four on one side of The Drive and one on the other, and each set in a large, well-tended garden.