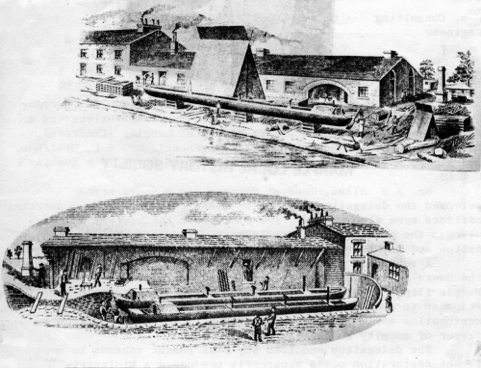 Top Lock House was the key to the whole area. Although it is now two houses it was established by Samuel Oldknow as a boat building operation. The single story part comprised workshops and the boats themselves were assembled in the open where the houses now have a stretch of lawn. (Top drawing.) Behind the workshops was a dry dock, now filled in, where working boats could be repaired. (Bottom drawing.) It was operated by the Jinks family for many years and as well as building new boats and repairing old ones they offered additional services includin 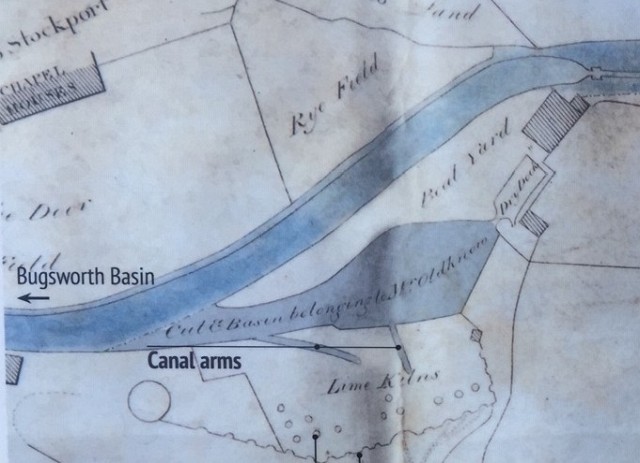 g shoeing horses and general blacksmith manufactures. Jimmy Jinks had moved to Marple from Odd Rode, near Congleton. He established his business in 1840 and 40 years later he was still working at the age of 78. His son Richard was in the business with him and they employed five men.

Moving clockwise beyond the boatyard there is the arm of the canal, now a marina, but originally built specifically for Samuel Oldknow’s lime kilns. Although the bank of kilns is at a lower level than the canal, each kiln was loaded with limestone and coal from the top. Boats loaded with these raw materials would dock in the two short arms of the canal shown on the plan, be unloaded, and then the coal or the limestone would be dropped into one of the respective kilns in measured amounts - a very efficient delivery method. Although the docking arms have been filled in long ago, by using the plan it is just possible to see the place where they joined the canal arm (or perhaps it is just wishful thinking.) 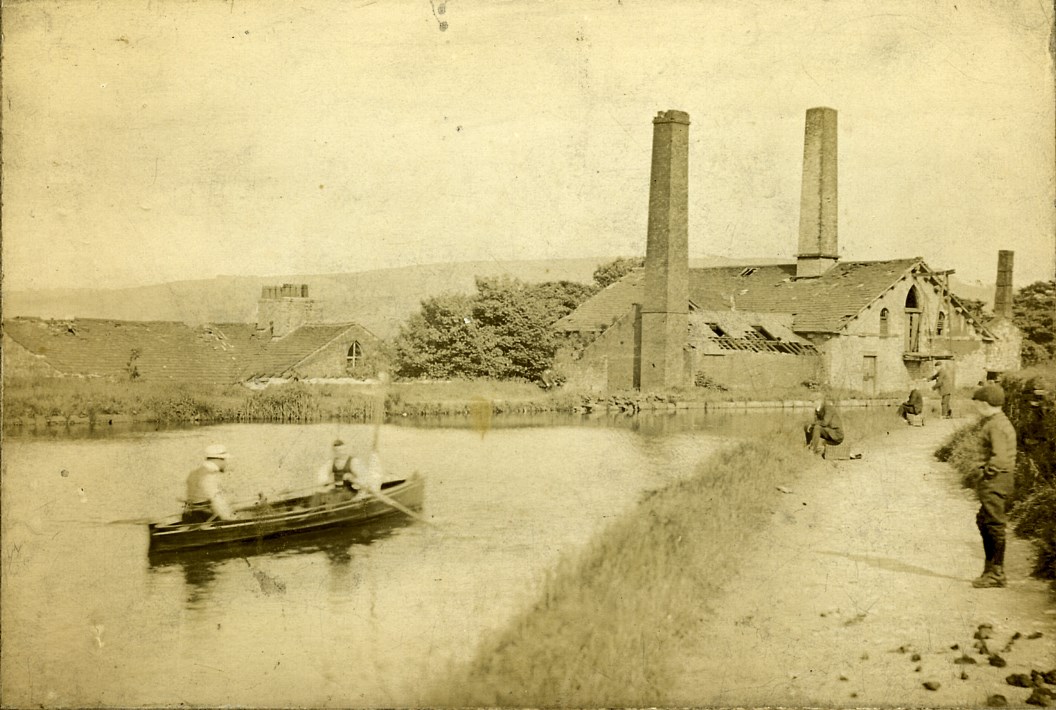 The ruins of the Mineral Mill

The roof of the house that can be seen just to the right of the Armed Forces Club is now known as Bleak House but was formerly the home of the manager of the Mineral Mill. Originally built as a corn mill by Samuel Oldknow, this was converted to a mineral mill in the 1850s by the Arkwright family which had taken over control on the death of Oldknow in 1828. In its new role it processed and ground plaster-of-Paris, lime and high-sulphur coal. Raw materials would be delivered at the Tramway Wharf straight to the mill and finished product could be taken away either by canal or carter. It was a substantial building in its own right as can be seen from this photograph taken in the early years of the twentieth century. The upper story and roof of Bleak House are on the left behind the boat. The mill itself was four stories although only two can be seen in the photograph. Around the mill were some smaller buildings and workshops and also a cylindrical kiln used for part of the manufacturing process. Most of these buildings and the mill itself were demolished soon after this photo was taken. 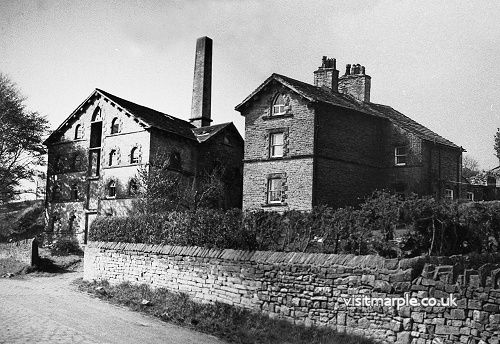 This image of the Mineral Mill (long demolished) as it would have been alongside Bleak House was created from two separate photos on the Virtual Tour by Noel Brindley.

The corn mill was run by the Brindley family for many years until the company moved to Macclesfield in about 1850. Francis Brindley came originally from Staffordshire and worked closely with Samuel Oldknow, probably running the corn mill at Mellor Mill before taking control of this larger enterprise. He developed his business to become a corn merchant and grocer as well as milling flour.

Beyond the site of the Mineral Mill, on the far side of the canal, is a narrow strip of land bordering the canal before it falls away towards Strines Road. This was the Tramway Wharf - the wharf which marked the temporary terminus for the Upper Peak Forest 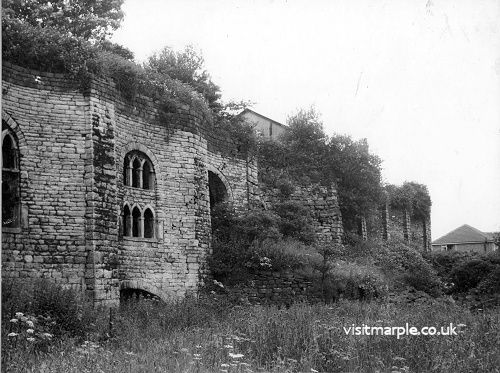 Canal. The upper and the lower sections of the Peak Forest Canal had essentially been completed by 1797 with two important exceptions. The aqueduct over the Goyt was still under construction but the flight of sixteen locks needed to join the two canals had not been started. Money was a problem and new finances had to be raised but in the meantime the company built a temporary tramway as an interim measure. Limestone from Bugsworth was unloaded at the Tramway Wharf, carried down by the gravity operated trucks and reloaded onto different boats at Bottom Lock for the onward journey to Manchester.

It might have been a temporary expedient but the project was hugely successful. At its peak it was carrying 1200 tons of stone in a day such was the demand for limestone. The track was doubled to cope with the volume and Tramway Wharf was extended as far as Brick Bridge. Even when the flight of locks was fully opened, the tramway continued for almost two years in order to supply Manchester’s requirements. Even when the tramway closed and was dismantled, the wharf still served a purpose as it became the wharf for the mineral mill.

After that it reverted to being a narrow strip of grass once more but recently it has taken on a new lease of life. Steve Gent has bought the full length of the wharf and is hoping to recreate something of the atmosphere it once had. He has made an ambitious start by mooring three traditional working boats alongside the wharf. These represent some of the many varieties of freight carriers using the canal at different times. The next stage will be to reinstate a section of tramway near Brick Bridge and emulate Bugsworth Basin in recreating a tramway carriage to run on the rails. Details of the four cranes that were used at the time will allow replicas of some of these to be made to complete the project. The whole scheme fits in perfectly with the aims and ambitions of other groups working to similar ends, Marple Wharf CIC, Fr 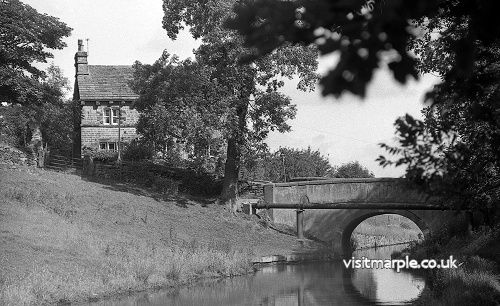 iends of the Lime Kilns and the Revealing Oldknow’s Legacy project. If all their plans come to fruition Marple will have a large and unique attraction which will both entertain and educate visitors to the canal system.

Brick Bridge which marks the end of the wharf is both distinctive and unusual. It is an elegant turnover bridge, transferring the towpath from the east side to the west but it is unusual in that it is built of brick. Almost every other bridge on the canal is made of stone as that was the accepted material. However, the canal company had bought a large quantity of bricks for the construction of the locks and when the locks were postponed because of shortage of finance; it was decided to use the bricks to make a bridge.

Just to the west of Brick Bridge, on the left of the path leading to All Saints’ Church is a large concrete capping to an old mine shaft. This is Picky Wood Pit, one of three in the vicinity owned by Oldknow and used to supply the lime kilns. Although active in the early nineteenth century it had closed before 1872 as it was not competitive with the high quality coal from Yorkshire. Walking back along the towp

ath to Top Lock, another of Oldknow’s pits is just to the left in Barn Field where Chapel House Farm stands.

We are now back at Junction Bridge, our starting point, but before we say goodbye to Top Lock it is worth sparing a glance at Marple Wharf, the area up to Church Lane Bridge. All this land was owned by the canal company with the exception of the plot where five town houses have been built recently. This was owned by Aaron Eccles, (left) a prominent local resident and lawyer, and it has retained distinct ownership ever since. Everything else is canal company property and they used the area as a small industrial site. On the west side of the Macclesfield Canal were a group of buildings, including the Company Office, a toll house, stables and warehouse and most of these can still be seen. The toll house facing Top Lock still retains the board on which the scale of tolls was once listed. It stands at the end of a row of three cottages and was where the company’s employees received wages. A road behind the cottages leads to the old stable building and to a small brick building erected by the MS& LR after the railway company took over. Some of this will disappear when the Canal & River Trust carry out their development but at least the toll house cannot be demolished and hopefully the warehouse will be saved by the community group now trying to buy it. With that and the other independent efforts to preserve and to build on our heritage, there is hope yet. More power to the people!

Back of Marple Wharf

End of docking arm near the Lime Kilns
Top Locks