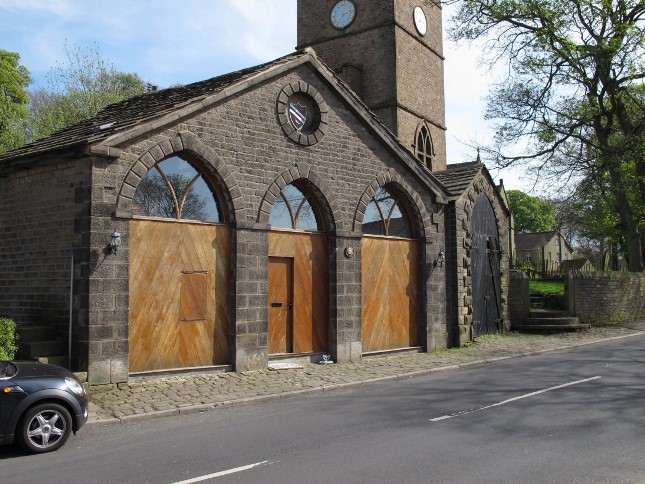 The larger of the two build 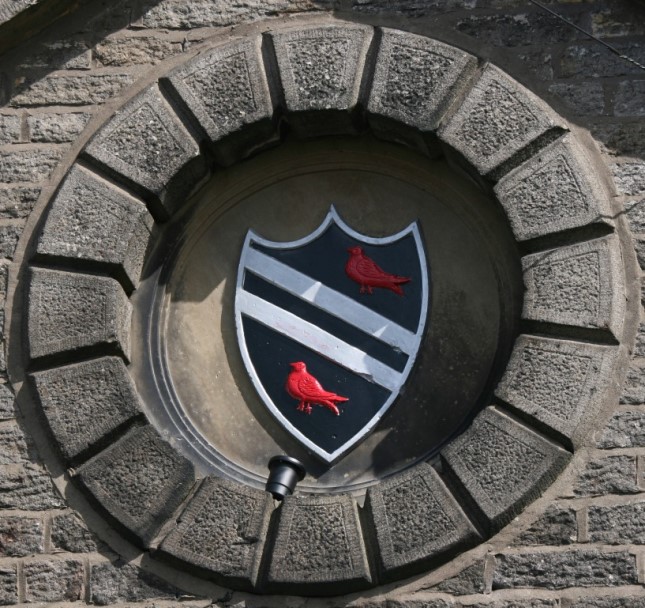 ings is now used as a domestic dwelling but it is not too difficult to work out what it was. It was built by John Bradshaw-Isherwood of Marple Hall to accommodate his coach and horses whilst he was attending services at what was then a new church. If there is any doubt about its use there is a mounting block just to the left of the building. Stockport MBC dates the building to circa1815 though Historic England is less precise. We suggest that it was probably a little later as the steps have a contemporary inscription “J I 1823” - presumably “John Isherwood 1823”. This is confirmed by the Bradshaw family arms carved in a recessed roundel in the apex of the building.(left) The squire was a conscientious churchgoer with his own private alcove in the church and he and his family attended twice a day on Sundays. A visitor to Marple Hall at about this time described the procedure on Sundays:

Immediately after breakfast Bumble (their nickname for one of the coaches) appeared at the door, and behind it a servant with two ponies for “the girls.” The old Squire entered the coach and, as he drove through the village, it was the signal for four public houses to close their doors. The Landlord would say “Here comes the old Squire, shut up.”

From this we can tell that the Hall had at least two coaches, one for longer distances and the lighter, more versatile “Bumble” for local journeys. There were four daughters so presumably two of them shared a pony for the journey to church. The coach house would shelter both the coach and most or all of the horses for the duration of the service which could go on for up to two hours.

The smaller building attached to the coach house is also not difficult to identify. The macabre carving of a skull and crossbones into the keystone of the arch suggests death and that is exactly right - this is a rare surviving example of a H earse House - a building to accommodate a township’s funeral hearse. The word “hearse” is perhaps rather grand for the vehicle that was kept here. It was not uncommon in the early and middle parts of the 20th century for hearses to serve as both funeral coach and ambulance, depending on the immediate need that the community had for them. However, the popular idea of an elaborate vehicle with glass sides displaying the coffin and drawn by two black horses is more appropriate for later Victorian times and for communities rather wealthier than Marple. It would be much more likely to be more of a bier than a hearse. It would be made up of a flat wooden form mounted on simple wheels. The body, wrapped in a shroud, or the coffin was placed upon this framework and wheeled from the house to the church and then to the burial place.

The hearse house was commissioned by Samuel Oldknow himself, the driving force behind the construction of the Georgian church. We know this because it demonstrates several of the architectural conceits that characterise almost all the buildings commissioned by Oldknow. Typically there would be some, if not all, of these features: 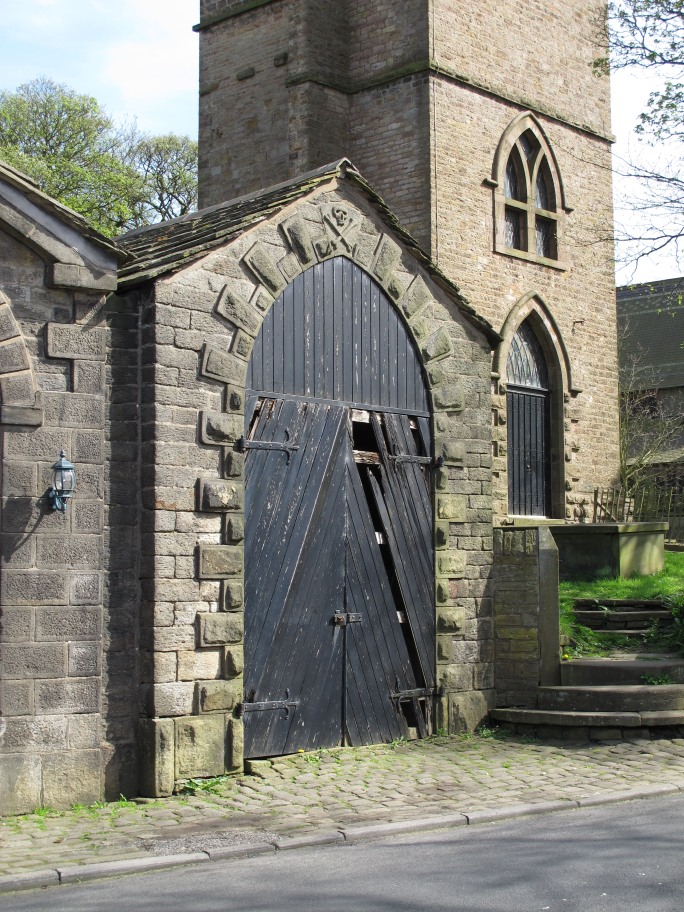 Although the building does not have blocks under the eaves or a string course it does have a pointed arch doorway, more pronounced than the three bays of the coach house. However, it is the Gibbs Surround that really identifies it as an Oldknow building. Named after James Gibbs, the influential architect of the early eighteenth century, it was a much older stylistic design which he popularised.

The essential element is the alternation of blocking with non-blocking elements around a window or doorway and this is demonstrated very clearly in the hearse house. The large and small blocks contrast in size and each individual block is cut back around the edges to make its size and placing very clear. In addition, the central part of the face of each block has been given a deliberately rough surface.

Hearse House (click image to see a view from the graveyard)

After two centuries in its care, the church has now decided it no longer needs the luxury of a dedicated house for a hearse. Indeed for many years it has been used as a convenient ‘glory hole.’ Consequently in 2019 it sold it to the owners of the house next door. Like the coach house, it is a listed building, so architecturally it remains separate and distinct. However, the new owners have invested in a new door and the four archways now present a more uniform face to Church Lane.

The one problem we are left with is why the two buildings meet at an angle. The reason for joining the Hearse House to the Coach House could be to save money but why were they not properly aligned? This email address is being protected from spambots. You need JavaScript enabled to view it.?