Pear Tree Farm in Mill Brow recently came up for sale. Grade II listed, it was originally a seventeenth century farm house, complete with mullion windows and a stone roof. This makes it distinctive though not unique, but what really makes it stand out is the adjacent barn. As with the main house, this has been given a thorough twentieth century ‘makeover’ but it is not difficult to envisage its original function as a barn. Local legend has it that John Wesley preached there on one of his visits though the authentication is not as reliable as Bongs. 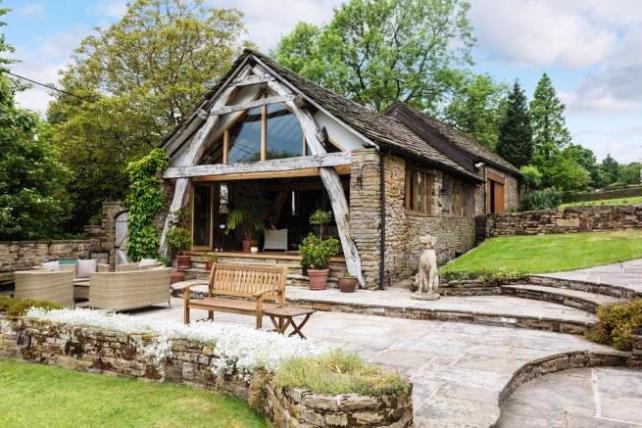 It would appear that the original barn has been “restored” out of all recognition though it doubtless makes a very pleasant room to relax in on a summer evening. However, the adjoining building behind has not been subjected to the same extent of renovation and still performs its original function as a barn, albeit for storing upmarket lawn mowers rather than hay and straw. But what exactly is a “cruck building”?

The structure is a simple but elegant design comprised of ‘A’ frames that go from the apex of the building down to the ground. These frames are usually constructed of curved timbers - the cruck blades - using the natural shape of the tree. More often than not, the tree is sliced long-ways down the middle so that the two sides are symmetrical. The two timbers meet at the apex and are tied together with a collar or tie-beam. Similar ‘A’ frames can be added at intervals to make a building of any desired length. 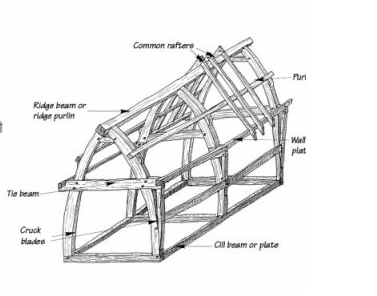 This inverted ‘V’ shape (left) has the advantage that the roof load is carried directly to the ground. Consequently the wall frames can be made using lighter construction materials and they are held in place by the cruck frame. The design probably evolved in Anglo-Saxon times but the technique really came into its own in the medieval period. Large halls were built in towns using this concept and a large cruck barn became a sign of an individual farm’s prosperity. Many of the largest and most substantial cruck barns were tithe barns, erected by the churches and monasteries to store the annual tithe, which was usually paid in kind. The barns could be easily divided into sections or bays and threshing would have been carried out indoors.

By the eighteenth and nineteenth century cruck-framed buildings were in decline. This was partly because they used large timbers, which were increasingly required by the navy, but box frames were proving to be more popular. Box frames used just as much timber but the individual staves were smaller and lighter and therefore cheaper. Box frames were particularly popular for residential buildings because they allowed the building of a second or third floor. Because they were a square construction, they made more efficient use of town centre space. A further advantage of box frames was the ease with which extensions could be added.

Box frames (below left) consist of wall frames connected at intervals by cross tie beams. These form convenient bays. The roof is a separate element which bears onto the external walls - in effect a lid on a box. Box frames have rafter roofs with no purlins supporting the rafter at mid span. A variant on the box frame is the Post and Truss design (below right) and this is the most common surviving timber frame building form. The important difference is that principal rafters are jointed into the tie beam and this forms roof trusses to carry purlins which in turn support the rafters and roof covering.

The design might be old but a surprising number of these buildings still survive. There are over 3000 extant in England and Wales and there are some excellent examples near us. As well as the barn at Pear Tree Farm there is Old Clough Barn in Windlehurst Road. Like Pear Tree Farm this is part of a private property but is Grade 2 listed. It comprises a range of former farm buildings, six bays in length. These are mainly stone-built but they include elements of two timber-framed buildings. The whole structure was built to different designs at different times, quite a contrast to some of the imposing tithe barns or, for that matter, Newton Hall on Duckinfield Road, Hyde. 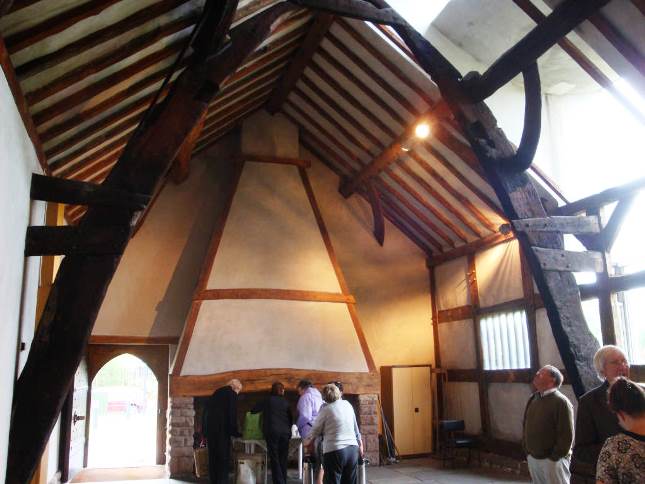 Newton Hall is cruck-framed with three pairs of crucks and timber-framed side walls built on a stone plinth. It is rendered at the rear with a thatched roof and the building dates from 1370. This was a medieval manor house and part of a larger complex of buildings. At some stage it was encased in a brick building with a slate roof and this explains how it has survived so long but it had deteriorated badly by the 1960s. It was renovated by Sir George Kenyon in 1970 and it is now owned by a heritage trust and is open to the public on an occasional basis. It is well worth a visit if you get the opportunity. 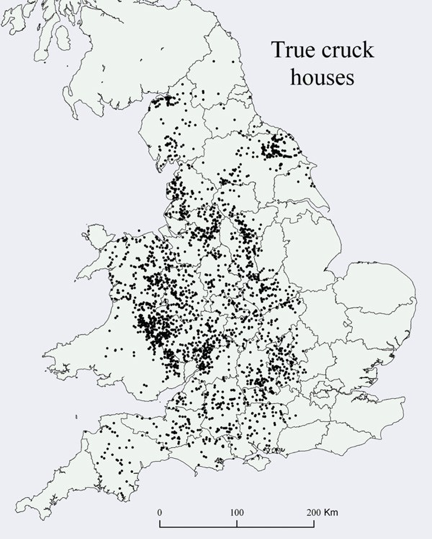 When the distribution of the 3000 cruck buildings is plotted there is a marked westerly distribution. It is likely that the dearth of these buildings in the east and south east is explained by the scarcity of suitable large trees, particularly oak. We are particularly fortunate in having so many near to us so let us do all we can to support the conservation and renovation of these iconic buildings. After all, how many of us live in a building that is likely to still be around in six or seven hundred years.