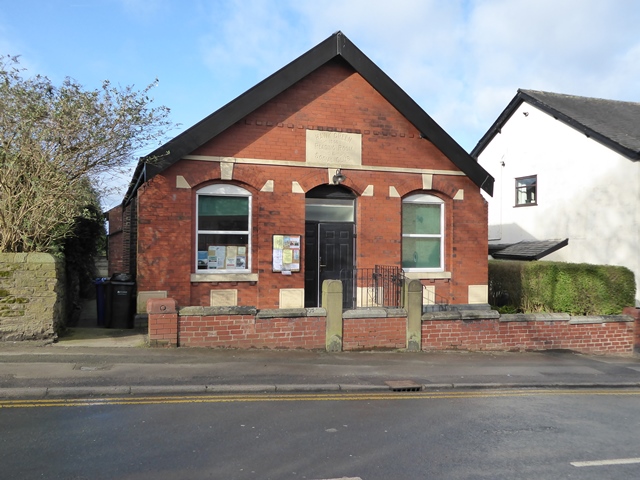 Hawk Green has a ‘Reading Room’. You will have seen it, on the right, as you reach the top of Upper Hibbert Lane, just before the Green comes into view. It is a simple dark red brick building (above) and the plaque (below) above the door tells us that this is Hawk Green Reading Room and Social Club and that it dates from 1906. 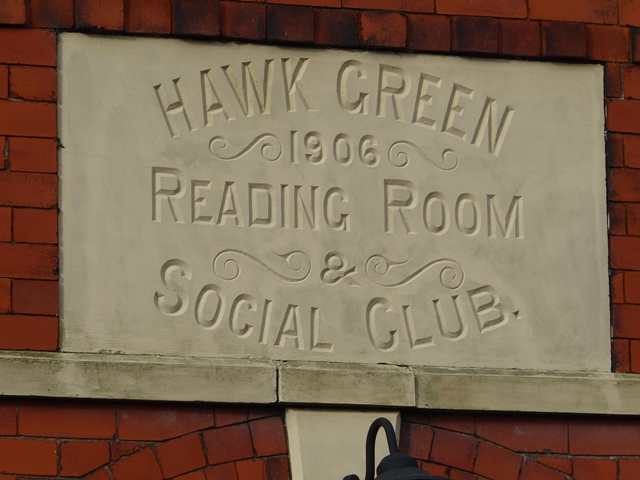 The foundation stones, spaced along the base of the frontage were laid on 13th October 1906, and the report, from an unknown newspaper, gives a lively account of the event: 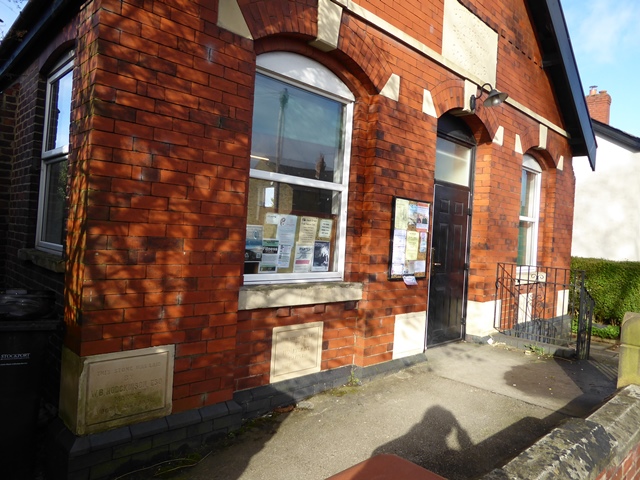 ‘For many years there was a “Reading Room” in Hawk Green where the Local Board met until offices were acquired in Marple proper. In 1882 Compstall Industrial Cooperative Society turned the building into a shop, and so the old reading room closed, and young men and others were deprived of their meeting place. Lately, land has been donated next door to the original reading room by Mr Shepley-Shepley JP, owner of Shepley Mill, and a £100 donation from Mr Frank Barlow JP., CC, has allowed a start to the proposed building. The erection and fitting out of the building is in the hands of Mr John Waine, Builders of Marple, to the design of Mr J. Higginbottom, architect’. 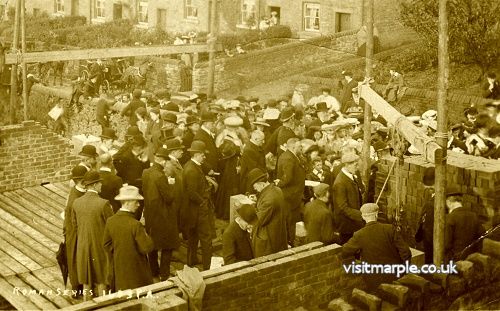 ‘On Saturday afternoon, amid great rejoicing, the foundation stones of the new building were laid in the presence of a large crowd of spectators’. Mr William Bradbury JP, Chairman of Marple Urban District Council, presided, saying that ‘the proceedings of the day are the commencement of a new era for the place and give a bright prospect. Man was made a social being and yearned to meet his fellow men, where he might have intercourse and exchange ideas. …. The working of the club was to be on very broad principles. No politics or sectarianism were to be allowed. They might be Liberals or Conservatives, Socialists, Labour men, Churchmen, Nonconformists, or even Roman Catholics, but they would have to keep their opinions to themselves there. Any young person [man] of 14 years of age could join. …the club would be conducted on temperance lines. There was an amount of shyness on the part of some young men who could not say “no thank you” when they should and the club would not be the temptation they might meet in other places’…..Building costs were estimated at £322, fitting out would bring the cost to about £500, and it was intended that the premises would be out of debt by the time they opened. (Applause).

P.F. Mountcastle was listed as a ‘cotton spinning employer’ on the 1901 census, (but living on Parsonage Road, Withington, with no apparent connection to Marple)

The six foundation stones were laid by notable local people.

‘Mr Bradbury read a letter he had received from Mrs Frank Barlow, regretting that she was unable to attend and enclosing a donation of five guineas. She expressed her warm sympathy with the young men and their object, and hoped that the new building would find them means of healthful recreation, and help them on their way in life. Mr Bradbury laid a stone on behalf of Mrs Barlow, using the trowel presented by Mr E.N. Davenport of Disley. Mr W.A. Wood of Hawk Green presented a trowel to Mrs Samuel Dixon of Dolefield, Marple, who laid a stone. Major Wainwright, JP presented a trowel to Mrs McLaine who laid a third stone. Mr Charles F. Johnson, of Buxton, (a native of Marple) was the recipient of a trowel from Mr A.M. Creswell, on laying the fourth stone. Mr Johnson made a lively and vigorous speech, and generously handed over the title deeds conveying the land to the trustees, as a free gift. Dr Burton presented a trowel to Mr Councillor Walter B. Hodgkinson who laid the fifth stone, and Mr Councillor H.N. Bickerton presented another trowel to Mr P.F. Mountcastle who laid the sixth stone, which concluded the ceremony. Music was provided by Marple Reed Band, and everyone took tea in the United Methodist Free Church School, followed by a concert, presided over by Councillor Potts.'

Just Six months later, the building was finished and was declared open on 27th April 1907, as reported in the Stockport Advertiser of 3rd May 1907.

‘The opening ceremony of the new Reading Room and Social Club at Hawk Green took place on Saturday. The building is of brick, with ornamental front, and is of neat design. It will have rooms for games, a billiard table, offices and a heating chamber below the back portion of the premises. The ground has been nicely laid out and a neat boundary wall erected by some willing workers. There was quite a little knot of interested persons at the opening. Amongst them were Councillor Geo. Potts, chairman of the committee, Alderman Frank Barlow and Mrs Barlow, Councillor William Bradbury, JP,CC, Mr John Waine, Mr Higginbottom, Mr Joseph Turner and others. Mr Turner said that it was with the greatest pleasure he performed the duty on behalf of the committee of handing over to Alderman Barlow the silver key with which to open the door of the new club. Alderman Barlow said he had great pleasure in opening the door, and declaring the club open.

Councillor George Potts, presiding, said it had at first been contemplated to erect an iron building on a plot of land across the Green, near some cottages, but when Alderman Barlow's offer of £100 was received, they thought something better might be ventured upon. The result was the present building which had cost £330, of which they still required £140 to clear them of debt. The object of the club was the intellectual, social and moral welfare of the young people, and the committee were anxious to keep them away from anything that which would tend to lower, debase or disgrace anyone. Mr Potts was pleased to see Mrs Barlow there, also Councillor William Bradbury (Chairman of Marple UDC), who was anxious to do anything he could for the improvement and comfort of the people of Marple. Unfortunately Mr Mountcastle and Mr C.F. Johnson were unable to be present, though they still support the venture.

Alderman Barlow, J.P., expressed his regret that neither he nor Mrs Barlow was able to be present when the foundation stones were laid. He heartily thanked the committee for their kind invitation for him to open the door. He proposed votes of thanks to Mr Shepley Shepley for the gift of the land, to Mr John Waine, the builder, and Mr J. Higginbottom the architect for their creditable work, the ladies who had cleaned the room, and the Chairman for presiding. He trusted the officials would prevent gambling of every kind whilst allowing all kinds of games of skill or recreation. Councillor William Bradbury, J.P., endorsed these sentiments, and hoped that with economy and careful management they would be assured of success, and soon be out of debt. [Applause]

By the time the Reading Room opened the large Goyt Spinning Mill had been in production for two years, and the population of Hawk Green was increasing as more workers were taken on, so the Reading Room would have been well used. It was equipped for every eventuality, even down to its own inscribed crockery. When Goyt Mill ceased textile production in the 1960s it went into decline, but by 1990 a group had obtained grants for basic repairs and decoration, and the improvements encouraged greater use, providing income to keep it going. 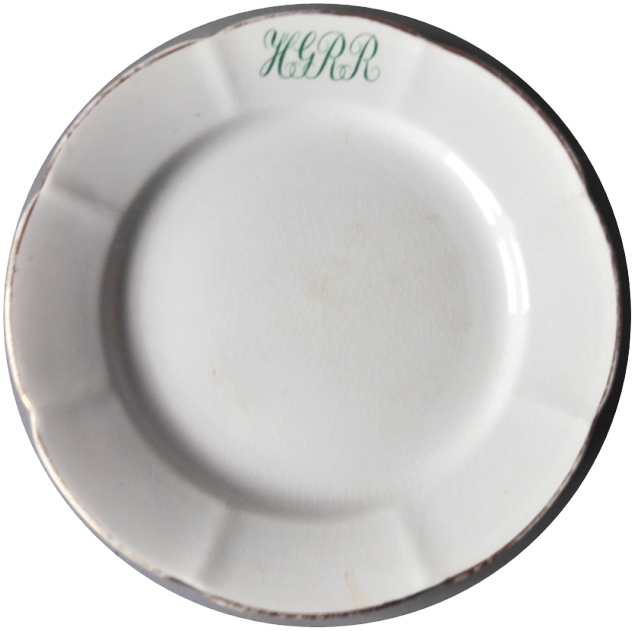 Nowadays it fulfils the functions of a village hall. A range of local clubs and societies hold their meetings there, it is used as a polling station at election time, an art group meet on Tuesday mornings and put on an exhibition of their work in spring each year, and you can hire it for a party or family gathering. It’s such a useful facility, and Hawk Green just wouldn’t be the same without it. 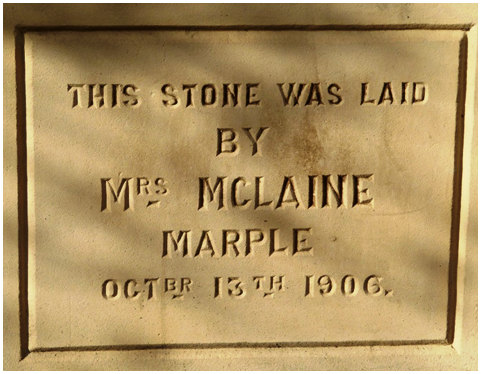 Of the people named on the six foundation stones, and their ‘trowel bearers’ we know the identity of: Mrs Frank Barlow, (a daughter of Thomas Carver and married to Frank Barlow, a scion of a Hazel Grove hatting family); C.F. Johnson (a grandson of Aaron Eccles, local attorney of Beamsmoor); W.B. Hodgkinson (one of the partners in Hollins Mill); and we know that P.F. Mountcastle was listed as a ‘cotton spinning employer’ on the 1901 census, (but living on Parsonage Road Withington, with no apparent connection to Marple), but who were Mrs Samuel Dixon of Dolefield and Mrs McClaine? Of the ‘trowel bearers’ Major [Joel] Wainwright was the manager of Strines Printworks; William Bradbury JP was Chairman of Marple UDC, and Mr A.M. Cresswell was possibly a descendent of Aaron Eccles.

But who were Mr E.N. Davenport of Disley, Mr W.A. Wood of Hawk Green, Dr Burton, and Councillor Bickerton and why were they taking part in the proceedings? Answers on a postcard or by email, please.

Marple T'ai Chi classes on Tuesdays at the Reading Room