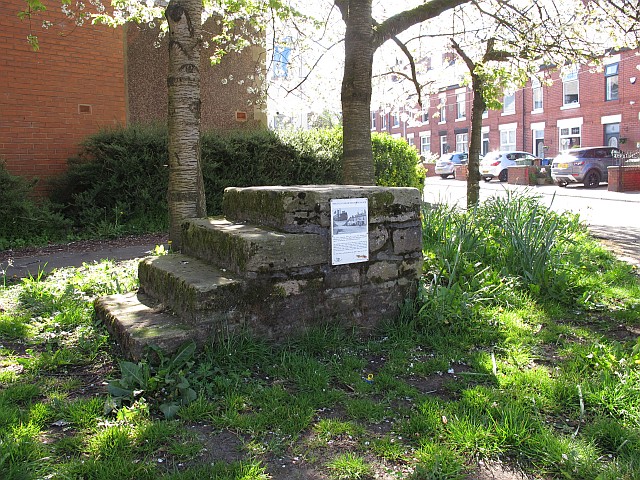 Have you ever thought about how our ancestors moved around Marple and Mellor in the days before motor cars and public transport? Of course the rich would be alright. The Isherwoods or the Hudsons had their own coaches and, slightly down the social scale, the wealthy businessmen returning by train from Manchester each day would take a horse-drawn cab.

The vast majority of people would use that reliable vehicle of shanks’ pony. No, it doesn’t have a capital letter as ‘shanks’ does not refer to a person as I first thought. It refers to that part of the leg between the knee and the ankle, the shinbone or tibia if we want to be posh. People would walk extraordinary distances by our standards for quite normal purposes. Three or four miles in the morning to go to work in the mill and a similar distance after work. Walking to St Mary’s in Stockport in order to get married.

In between these two extremes, a surprising number of people were able to use their own horses for moving from place to place. Horses cost money and they needed fields to graze in and some sort of stable. That ruled out people with no land but yeoman farmers, husbandmen and the like often kept a horse and used it for riding and for pulling a light trap. Which raised a problem - how do you mount and dismount gracefully?*(see postscript at the the foot of the article)

Horses are big. A typical horse i 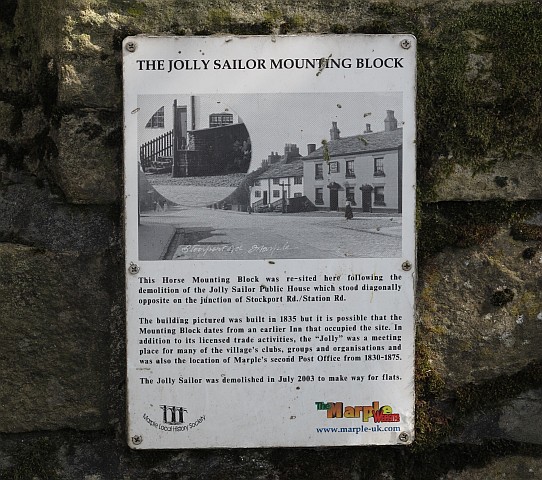 So why use a mounting block? The simple answer is to make it easier to mount a horse, particularly for the elderly or infirm. They were particularly useful for women riding side saddle or pillion as it allowed them to mount without loss of modesty. There were other advantages, as it put less strain on the stirrup leather and it reduced the chance of the saddle slipping to one side. For the horse, using a block reduced the strain on the spine, particularly at the withers. And one last point. There is an etiquette to horse riding. Horses are always mounted from the ‘near’ side, the horse’s left side. This in turn influenced the positioning of mounting blocks.

So where were these blocks used. They were a common feature outside inns, churches, farms and country houses and would be seen along the main streets of most market towns. They were a common feature until the late 18th century but they became less important as roads improved. Once wheeled vehicles such as coaches and carriages became commonplace the need for mounting blocks fell away as you didn’t need one for getting into carriages. They were gradually dismantled over time until now they are a curiosity and considered worth preserving.

So, how do our local mounting blocks match up to these criteria? We know of seven but there could be more. Perhaps the best known block is the one outside the Jolly Sailor. Unfortunately the Jolly Sailor is no more, but the block has been preserved (see the lead picture).

The full story can be found on the Marple Website:
https://www.marple-uk.com/heritage/jollysteps.htm
but, in brief, once demolition was inevitable, Peter Clarke and Mark Whittaker arranged for the developer to dismantle the steps and they were rebuilt on a small piece of land nearby, owned by Stockport. It was not the first time that these steps had been subjected to such an indignity; they had probably been moved at least once during their time serving clients of the Jolly Sailor. 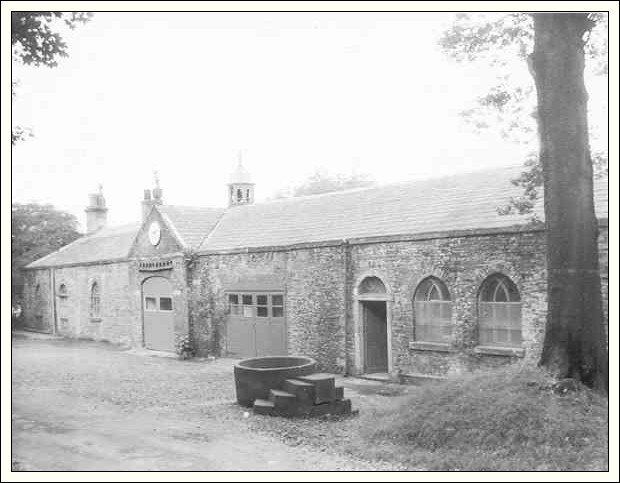 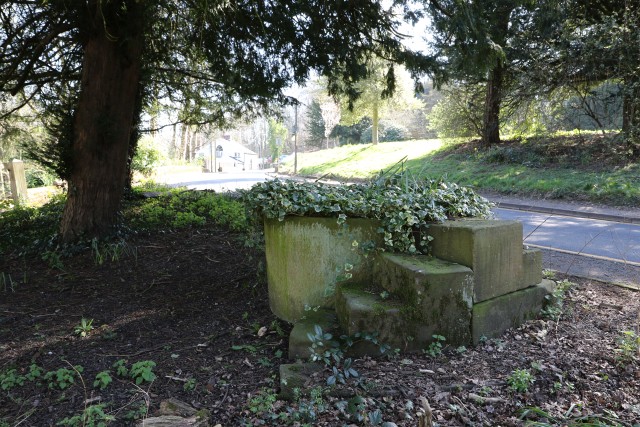 Another set of steps can be seen at the entrance to Brabyns Park where they form part of a drinking trough which has now been converted to a planter. This was a very upmarket combination as the steps are made from just three blocks of stone, a very expensive choice. Old photographs show it just in front of the stables which served Brabyns House but they have been moved from that position.

They are now furthe 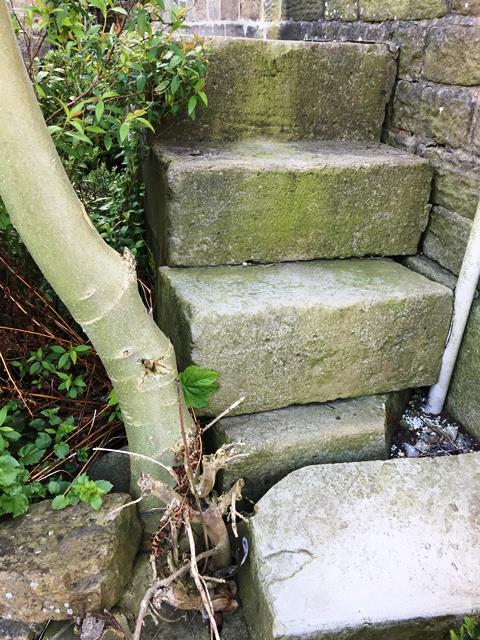 r away from where the stable block used to be and they have been turned around, with the steps on the other side of the trough.

When or why this was done we have no idea.

What is probably the only authentic mounting block in its original position is the set of steps at All Saints. (left) It is not immediately obvious as it is tucked away at the side of the old coach house and it is partially overgrown with a sturdy sapling and garden plants. Still, it has probably been there since the coach house was built and has helped local notables such as John Bradshaw- Isherwood, Aaron Eccles and Samuel Oldknow himself dismount and then remount after attending church. Like the Brabyns steps it is a high quality mounting block of shaped stone and it is to be hoped that it will receive a little more care and attention now its presence is more widely known.

So, we have found three mounting blocks but where are the rest? 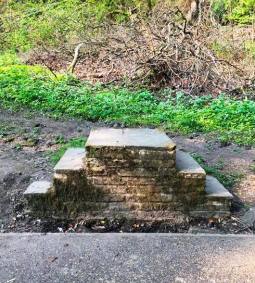 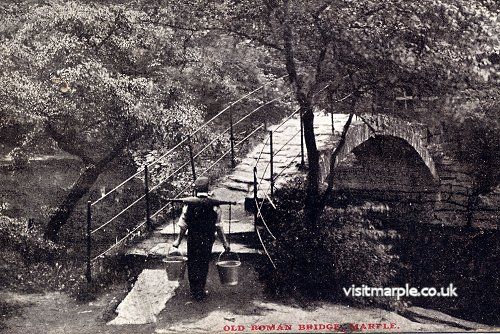 Two of them are on either side of the Roman Bridge (above) over the Goyt but these are modern steps, probably built by SMBC when they created a bridleway. Take a look at the steps on the Marple side of the bridge.(right) It is built from regularly sized bricks and each step is capped with flagstone. A nice neat job but not one carried out two hundred years ago. Windybottom Bridge, to give it the proper name, was an old bridge even when Oldknow owned the land in the vicinity. Indeed he is the man credited with installing railings in the bridge. As a packhorse bridge it was built without railings and relied on the nimbleness of the donkeys not to fall off.

And we finish with the newest steps of all - those on either side of the Iron Bridge. Mark Whittaker has done a lot for Marple in many different ways but the biggest and most ambitious project must have been the restoration of the Iron Bridge that he, with Peter Clarke and Ann Hearle, was instrumental in initiating and carrying through. You can remind yourself of the details with this account on the Marple Website:
https://www.marple-uk.com/ironbridge/

and bring yourself up to date with the latest news here: https://www.marple.website/community-projects/relocation-of-iron-bridge-plaque.html 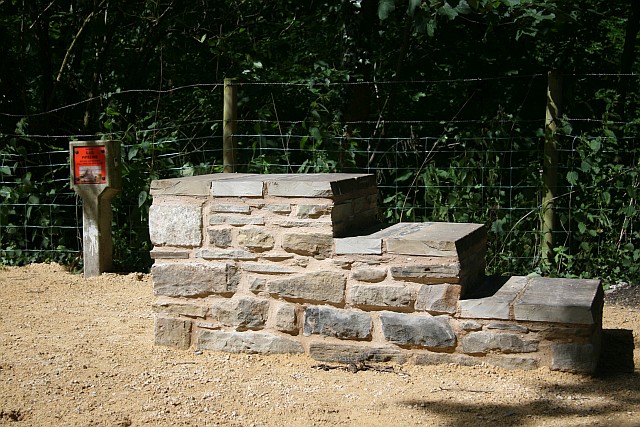 But our particular concern is the mounting blocks on both sides of the bridge. There were no mounting blocks there before the bridge was restored, they are a modern intervention. There was no need for them because it was a carriage bridge and anyone riding a horse across it would have done just that - no need to dismount. No health and safety.

The problem began as plans developed for the modern intervention during the Iron Bridge restoration project.

Let Mark himself take up the story:

For mounted horse riders to cross the bridge "safely" the engineers told us that the new inner green railings would have to be HUGE! If you can imagine how high the railings would need to be (in theory) to stop someone falling off a horse into the river, and then add a modern safety factor - they would have been above head height. We didn't like the modern intervention anyway but were ready to walk away if this requirement was included - it took a very long time to win the argument but we did. The agreed compromise was that horse riders must be guided to dismount and lead their horses across the bridge. The chicanes were also added to slow them (and bike riders) down. The blocks were a late addition at our suggestion after talking to some horse riders (who used to ride up and over the Bailey bridge and never fell off). They said that without mounting blocks some riders would be inclined to ride across anyway as remounting was such a pain.

Regarding the set on the Rollins Lane side (which were initially built with steps in one direction only), I remember us being furious about this after they were built. It's pretty obvious that if you dismount and lead your horse across the bridge towards Rollins Lane you would want to walk UP some steps in the direction of travel. Not dance around the block and then climb the steps from the opposite direction. We gave the council engineer a real hard time about this and soon after the steps on the correct side were added in response to the bollocking we had dished out.” 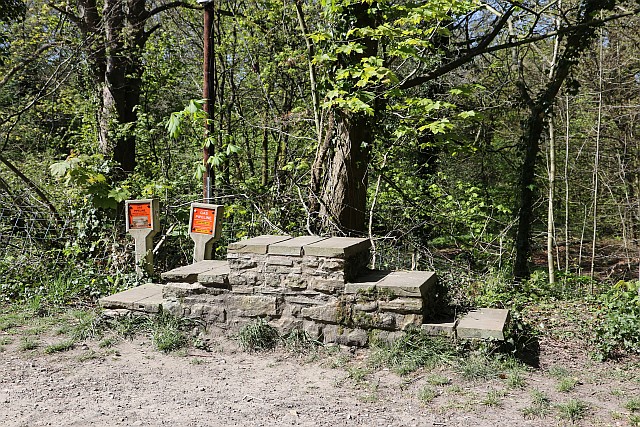 It’s good to know that even some of the newer additions to our heritage have a story behind them. However, we are left with a problem; “Why are all the mounting blocks in Marple? Where are the ones in Mellor?” It’s true that one of the steps at Windybottom is on the Mellor side of the river but why no steps at Mellor Church, at the Royal Oak or the Devonshire? Could it be that the Mellor folk were strong and athletic so didn’t need a mounting block? Or perhaps they were too poor to own a horse so didn’t need one for that reason. Perhaps there are lots of mounting blocks but they are all hidden away out of sight. If anyone knows of any that we have not mentioned, please let us know, preferably with a photograph. Come on Mellor! You don’t want to be left out.

‘Which raised a problem - how do you mount and dismount gracefully?’

Re your last sentence. As a lady who rode side-saddle for the last 25 years of 60+ years of riding horses, I can tell you that - done properly - one has a groom or gentleman friend to take the lady's hand (or if you were a bit "fast" you'd let them hold your waist) while one jumped down. Sadly, I didn't have a groom or gentleman to hand so I had to hold on to the saddle and jump or as I got older, I slithered down.

Apart from the elegance of riding side saddle (and as a surprise to those who've never tried it) it's much safer than riding astride. It’s virtually impossible to fall off unless your horse falls in which case the safety stirrup comes away with you as you jump. An obliging horse is an essential - although my Grandfather used to train difficult horses on side saddle because he was less likely to be dumped on the floor if the horse got nasty.

In the days when ladies rode horses either for hunting or riding in the park they usually rode a mare. Nothing to do with sex - just that mares tend to have longer backs and suit a side saddle better than a gelding - the side saddle sits further back than an astride saddle.

Of course men used the mounting block as did unaccompanied women. You noticed I said "unaccompanied women". "Ladies" never rode alone without a gentleman or a groom but "women" (and girls), the wives and daughters of farmers, well-off shop keepers et al) would be allowed to ride alone on family or business errands locally.

Sadly, my horse died 3 years ago and at my age and decrepitude I don't feel able to take on another horse.