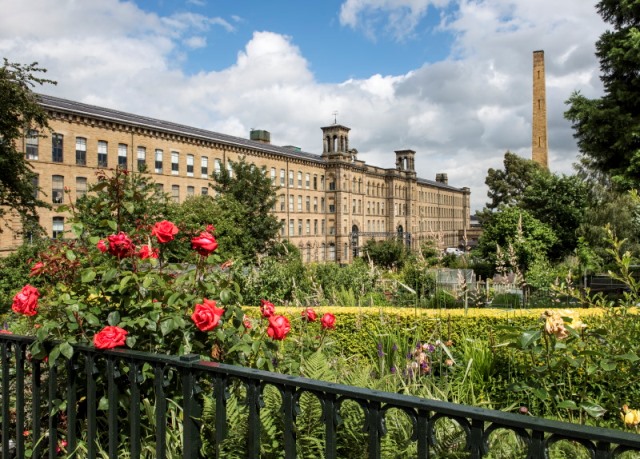 A tale of a nineteenth century model town, five locks, and a July day in God’s Own County. On boarding the coach, early 9am start, we discovered that Judith had lost her voice, but the day proved that she had not lost her organising skills. David Burridge became the voice of Judith for the day, on board the chara. On this final Society outing of the season we were to be taken out of our comfort zone – Manchester and Cheshire. Our destination this Saturday was to be the World Heritage site of Saltaire and the watery staircase of Bingley Five Lock.

After being treated to the experience of reversing a 49 seater around a corner, we arrived at Saltaire and were ushered into Victoria Hall. With our chairs arranged 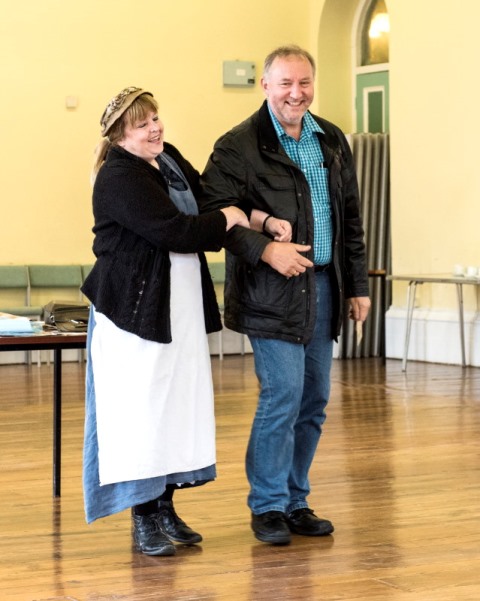 around the edge of rather large wooden ‘dance floor’, memory skipped back through the years to girls dancing around handbags, while this correspondent and other callow youths looked on, awkward and embarrassed. Once we were settled down with tea or coffee, Maria and Sally, our guides, distributed a bookmark to everyone. Each bookmark had information on one of the occupants of the village in the nineteenth century - name, age, occupation and marital status. Maria’s costumed character, Mrs Ellin Dooley, is as ‘common as muck’. She lives in an ordinary worker’s house on Amelia Street with her husband Henry, 12 children and another on the way. Sally is Mrs Caroline Hill, the wife of Saltaire’s security chief, Colonel Thomas Henry Hill. They live in the second biggest house in the village at 47 Titus Street. Their spouses were revealed by way of the bookmarks we had been issued. To some merriment, Arthur, was Colonel Hill, whilst Giles was Mr. Dooley. (Pictured left) Mrs. Hill & Mrs. Dooley formed an entertaining double act, banter and asides issuing forth.

Saltaire was the creation of Titus Salt, the owner of five mills in Bradford. His fortune was based on Alpaca wool, a novel material which became very fashionable. Like many other industrial towns in the first half of the nineteenth century, Bradford had grown uncontrollably and disease was rife in the slum areas. In 1849 cholera struck the town, 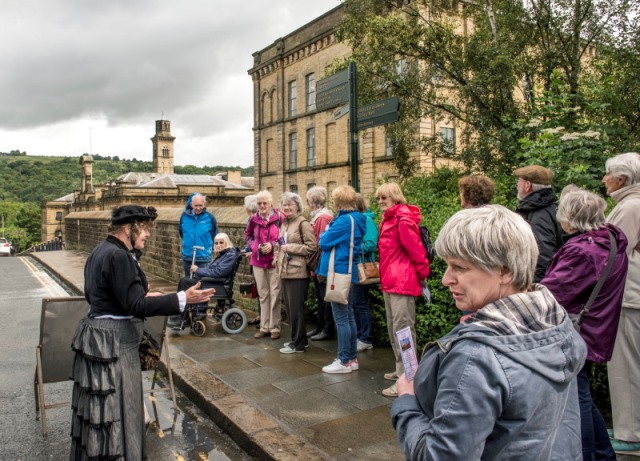 420 people died, and many more were infected. Salt, who was Mayor of Bradford at the time, saw that a radical response was needed, a different approach to housing, educating and providing for the workers and their families. No drinking then,Titus forbade 'beershops' in Saltaire, but you can now at 'don't tell Titus'.

He embarked on an exercise in social engineering, designing and building a model industrial town for several thousand workers. Saltaire was not the first model industrial community as more than 50 years earlier, Owen’s revolutionary social developments at New Lanark had attracted international attention. Salt’s plans were even more comprehensive, including a Congregational Church, Methodist Church, public baths, wash houses, a library, schools, hospital, club and institute and public park. 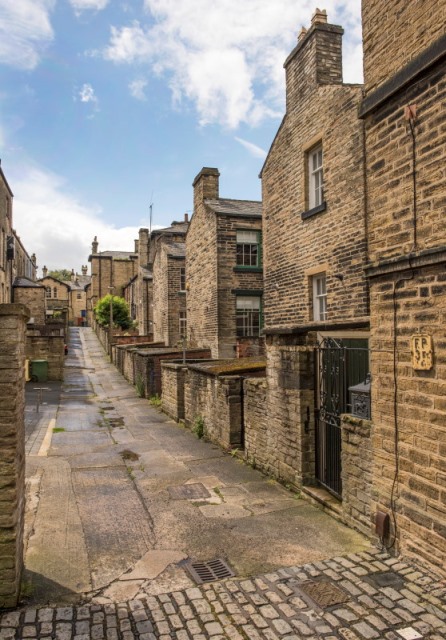 Hall, we split into two groups. One to explore the model town with Sally as a guide, whilst the other group was led by Maria. At this point Maria asked us to look at our personality cards. These showed us our family relatives, in which strata of housing we lived and how far we had to walk each morning to the mill.

With the mill looming in the background, the quality of the housing in Saltaire was revealed. Constructed of stone, many of the houses were similar in layout, consisting of living room, scullery, two bedrooms and half a cellar. Those intended for overlookers had an extra bedroom and a garden to the front. Winding through the streets, across cobbles, and up and down hills, we explored the varying styles of houses, looking for our alter-egos, finding those numbered doors on our bookmarks - names from nearly 200 years ago, lives lived in a different age. The houses were sold by the mill in 1933; the mill itself ceased production in 1986.

A year after production finished, the Italian Renaissance style mill was bought by Jonathan Silver. In the ten years that followed, until his untimely death from cancer in 1997, he saved the mill for posterity, and through his work paved the way to the granting of World Heritage status in 2001. The mill was in a dilapidated state but Silver could see the building's potential, and transformed it into retail and commercial units and an art gallery. Silver had the idea then of creating a gallery devoted to David Hockney. 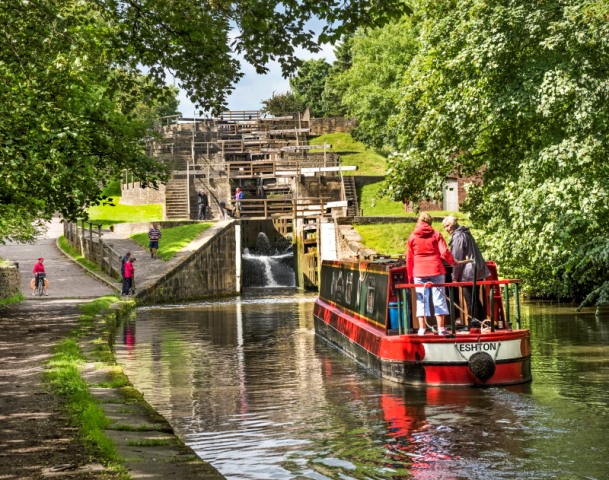 Regrouping with our fellow travellers, we boarded the coach for the short journey to Bingley Five Locks. Disembarking, we walked down a hill to the top of the locks. The café there provided sustenance for some, but most took the chance to have the maximum time at this site of the steepest flight of locks in the UK., with a gradient of about 1in5, a rise of 59 feet 2 inches over a distance of 320 feet. Fortunately two barges were starting the rise when we arrived, a chance to see the locks in action. This was a bonus, not booked by Judith, a simple twist of fate. The working of the locks is so devilishly complicated that a full time lock keeper is employed. Woe betide any attempts at illegal operation, the lock mechanisms are padlocked, out-of-hours.

All that was left now was the journey home, time to discuss the day, have a snooze, or just to gaze out the coach windows to the wild moorland cut through by the M62. The third sparkling trip of the ‘season’, three cheers for Judith.