Frank Pleszak, with a halo. Stage right, just what is going on, is the arrow significant ?

On a warm, potentially showery, May evening we gathered in Brabyns Brow car park, for a stroll led by Frank Pleszak, to learn about the mills of Marple Bridge. Confusingly, where we were standing, on the Marple side of the River Goyt, used to be called Low Marple, and the lower side (Marple Bridge) was called Ludworth. 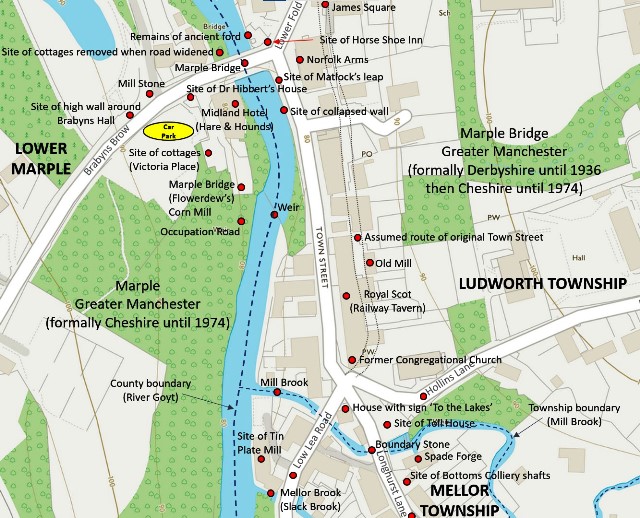 As you walk up Brabyns Brow, have you ever noticed a mill stone set above the wall to Brabyns Park, opposite the car park? It belonged to the seventeenth century corn mill, which stood in the rear car park of the Midland pub. You can still see four arches set high in the back wall, once part of a three storey mill. Its two waterwheels were linked to the weir on the River Goyt, which then stood 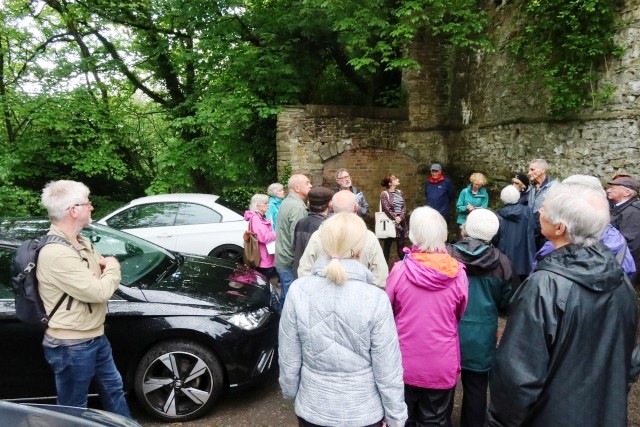 at twelve feet high. Flowerdew’s corn mill later took it over, before it was pulled down in the 1930s to be made into the present car park, when the weir was also reduced to about two feet high.

The Corn Mill yields it's secrets

Frank told us many interesting facts, not all related to the mills. One such was that the Cheshire/Derbyshire boundary was the River Goyt, running parallel to the main street of Marple Bridge. Pubs on the Cheshire (Marple) side closed earlier than in Derbyshire (Marple Bridge side). People would migrate across the boundary late at night to finish their pints, and all the empty glasses were returned at the end of the month! One night in the 1890s police chased a man accused of robbing graves through the Norfolk Arms pub, until he finally escaped by jumping straight over the wall into the river. This was known as Matlock’s Leap (roughly opposite the Post Office). The retaining wall there today is quite a height, having been rebuilt after a localized landslide in 1990.

We continued our walk along Town Street. Between Ryeflatt Interiors and Bridge Law I’d never noticed ‘The Old Mill’ sign on the gate. Not much is known about the mill that stood at the end of the ginnel. Silk machinery was found there when it became derelict, but the mill was more recently making lacrosse equipment, a game very popular in Mellor. Many knew of the yard in front of the mill from the feathers that floated around, as the local butcher plucked 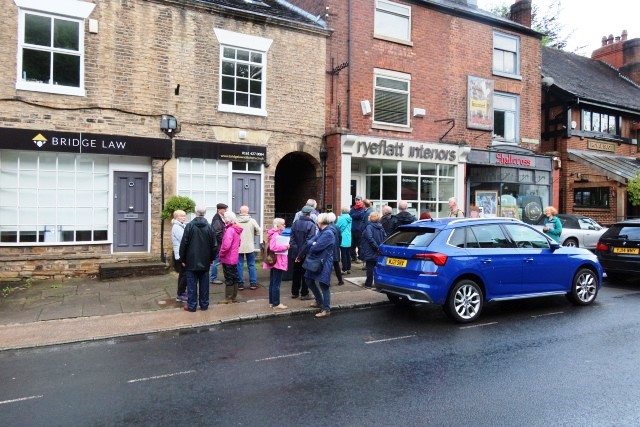 I was amazed to learn that the main street of Ludworth used to run behind the current row of Marple Bridge Town Street houses and shops. It must have been narrow, and would have passed right in front of the Old Mill. Other routes have also changed. The Glossop road would have passed along Town Street, up Hollins Lane and over Gird Lane. Lower Fold ran to Compstall. Longhurst Lane (Mellor) didn’t exist until the 1807 toll road, with the houses being built of brick rather than stone.

At the bottom end of Longhurst Lane, runs Mill Brook. On the left, the larger waterwheel (of two originally) belonging to Spade Forge can be seen. Originally it might have been a cotton fulling mill, but later it made metal machinery for the mills. It was owned for many years by the Yarwood family, related to Mike Yarwood, the comedian. 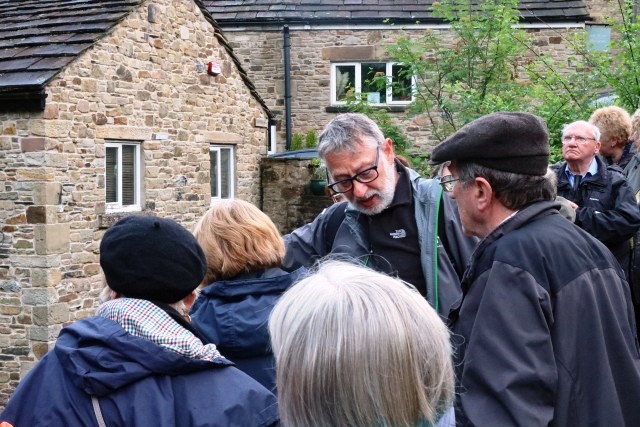 After Spade Forge, we crossed the road, onto cobbled alleyways leading to Low Lea Road. Mellor Brook crosses this road, on which a tin mill made equipment for the mills. This became an engineering mill, then later paper-cutting into the 1990s. We turned back at this point, not going further on to where Oldknow’s Mellor Mill once stood, the largest cotton mill of its time, employing many people between the 1790s and 1890s.

Many quarries and coal mines (last one closing on Ludworth Moor in 1983) added to the industries, to make Ludworth a thriving centre. Marple only rose to prominence after the building of the canals and locks (1804) and railways in 1865, and Ludworth declined. Steam powered machinery meant less reliance on flowing river water for power. 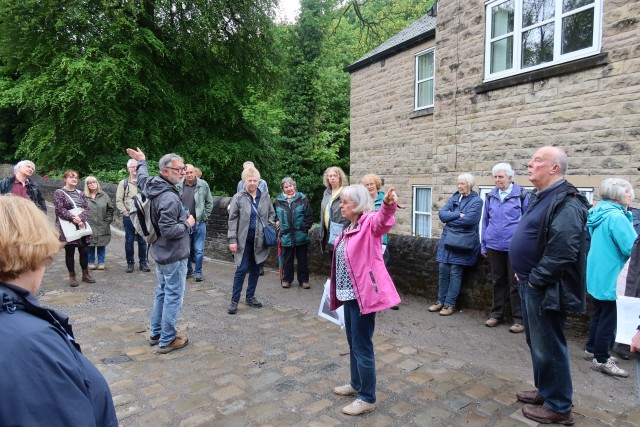 The choice is yours, left or right ?

Frank was so informative, with many interesting, diverse facts about Marple Bridge that the evening passed very quickly, and we all thoroughly enjoyed it.