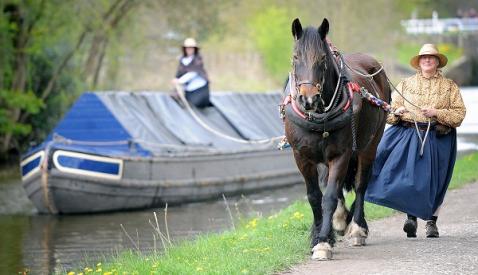 On a cold November evening Sue Day gave a the Society an entertaining talk, despite the best efforts of badly mis-behaving technology, on 'Horseboating in the 21st. Century'. A tour de-force as Sue, treated the society to a tale of a method of working that had disappeared by the mid twentieth century.

The Millennium year of 2000 saw Sue Day undertake her most ambitious horseboating journey. This would take Sue, on the borrowed narrowboat Maria, pulled by Bonny, from Manchester to London, and from there to the National Waterways Festival at Waltham Abbey. This journey of 310 miles and the negotiation of 298 locks, won the award, not surprisingly, given for the most meritorious and enterprising journey to the Festival. The voyage raised over £700 for Sue's chosen cancer charities and involved over forty crew members, whose ages ranged from 18 to 73. Sue was persuaded by the coverage in magazines and local press to set-up The Horseboating Society.

Sue described this journey to the Society’s November meeting of 2011. Unfortunately the meeting began with a slight hiccup. Unforeseen technology problems meant that Sue’s photographs, which she had brought, could not be used during the talk. Though this may have thrown some speakers, Sue rose to the occasion, and gave the audience a seventy minute description, unscripted, of the history and process of horseboating. The Romans are known to have used mules to haul boats in the UK. From 1740 onwards, as the canal system expanded, the use of horses for pulling loads grew. A horse can pull 50 times as much cargo, by weight, on water as on road. The development of structures on the new canals was governed by the consideration of horsepower. The heyday of horse haulage was from approx. 1750 to 1850. At first the boats were worked by men and boys. But after 1850, as the competition of railways increased, the boats began to be operated by families, with mothers and children working as and when they could. Horse drawn narrow boats in the Midlands lasted into the 1950s whilst horses pulling big barges, with their bigger payloads, were still at work on the Regents Canal in London until the 1960s.

Sue started her working life on an organic farm in the early 1970s. There she met a working farm horse, used for turning hay and other work. Around this time Sue spotted, on a local high street, a poster for a canal festival at Portland Basin, with a horse pulling barge. The rest, as they say ‘is history’.

Maria was built in 1854 by James Jinks, and was rebuilt by the Ashton Packet Company in

1977/78. Maria’s 150th anniversary in 2004-5 saw her restored to her cargo-carrying status. In 2005 she was loaded with 16 tons of limestone at Bugsworth Basin, re-creating her trade of 150 years before. Queenie pulled the loaded boat 8 miles and down 16 locks in Marple.

Sue went on to describe the crewing needs of a horseboat trip. The ideal number is six, each having a specific job. One ahead to set the locks, a second to check the towpaths for obstructions, Sue and horse, a fourth to lift the towline over obstructions, a fifth steering, and the sixth person to close lock gates .

Only five other examples of horse drawn boats are left in the country, being used for passenger trips and other pleasure traffic. Maria remains the only horse drawn boat that is used to carry cargo.

In the end despite the gremlins in the technology, a rewarding autumn evening on which to venture out into the cold, dark November air, an illuminating talk on a part of the industrial heritage that has all but disappeared.

For more information regarding horseboating visit