December brings the Society Christmas party and, this year, a talk by Warwick Burton, on the seasonal subject, the story of St. Nicholas. Warwick Burton is well known locally for his knowledge of the railways of Marple, an interest which his father, Monty shared, but now he was to share his knowledge of St. Nicholas, at this special celebration, a ‘bring and share’ buffet, for members. 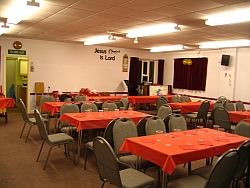 The 'casual labour' of the committee, turned up at the gates of the Evangelical Church, at 2pm. on a cold afternoon early in December. Their minds were searching for answers to that ‘what did we do last year’ thought. A busy hour ensued. Tables and chairs had to be moved, and arranged, tablecloths cut and spread, serviettes folded, and glasses placed. A car was unloaded, and the load of lemonade and fruit hauled into the hall, the ingredients for the renowned non-alcoholic punch. All done and dusted by the time an hour had passed, the hall was ready, time to party, soon !

The anointed hour has arrived, 7.15pm. The doors are opened, bags are carried into the brightness

of the hall from the darkness of the street. Bags filled with bowls, plates, and boxes, of a savoury or sweet course, for all to share. Carried towards the kitchen, where the food sorters took charge and placed them on this table or that, sweet or savoury. Then the party goer’s busied themselves, sliding into chairs, slipping into conversation, sipping the punch. Which table would be first this year? To keep the World/Hall peaceful, Hilary had a note from last year’s party; the same table would certainly not be first again. Only the extremely canny will know which table to sit at next year. No matter, the food was so enjoyed, an hors d'oeuvre for the celebrations to come, as December grows older. After the diners were satisfied with their fill, tables were cleared and then it was time for Warwick Burton to lecture on that very topical subject ‘St Nicholas the Origin of Santa Claus’. And what a treat of an early Christmas present, Warwick gave us, as we settled down. 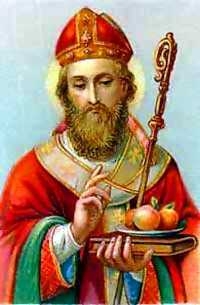 famous for his gifts, in particular in presenting dowries, three bags of gold, to the family of three impoverished daughters, so that they might not be led into dark ways. His feast day is celebrated on the anniversary of his death, December 6. This was traditionally considered a lucky day to make large purchases or to get married. By the Renaissance, St. Nicholas was the most popular saint in Europe. Even after the Protestant Reformation, when the veneration of saints began to be discouraged, St. Nicholas maintained a positive reputation, especially in Holland. During the Middle Ages, often on the evening before his name day of 6 December, children were bestowed gifts in his honour. In the Reformation in 16th-17th-century Europe, many Protestants and others changed the gift bringer to the Christ Child or Christkindl, and the date for giving gifts changed from December 6 to Christmas Eve. 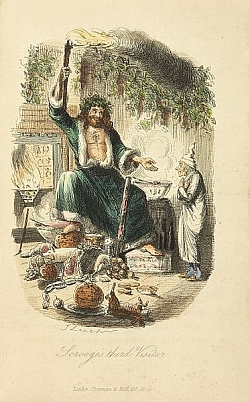 The modern figure of Santa Claus has its origin in the Dutch figure of Sinterklass, who in turn may have absorbed elements of the god Odin, who was associated with the Germanic pagan midwinter event of Yule and led the Wild Hunt, a ghostly procession through the sky. Over time, traits of this character and of Father Christmas came together to form the Santa Claus known today.

Father Christmas dates back as far as 16th century in England during the reign of Henry VIII, when he was pictured as a large man in green or scarlet robes lined with fur. He typified the spirit of good cheer at Christmas, bringing peace, joy, good food and wine and revelry. As England no longer kept the feast day of Saint Nicholas on 6 December, the Father Christmas celebration was moved to 25 December to coincide with Christmas Day. The Victorian revival of Christmas included Father Christmas as the emblem of 'good cheer'. His physical appearance was variable, with one famous image being John Leech's illustration (right) of the "Ghost of Christmas Present" in Charles Dickens's festive classic A Christmas Carol (1843), as a great genial man in a green coat lined with fur who takes Scrooge through the bustling streets of London on the current Christmas morning, sprinkling the essence of Christmas onto the happy populace.

Thanks must be given to the members who prepared the hall, brought food, sorted food, made drinks, and cleared up.

But the Society must give a very special thanks to Isabel Morris, who volunteers every year, working in the kitchen, arranging the food as it arrives and then washing up all evening. Isabel is Kirsten Western’s daughter. Kirsten was the treasurer, of the Society for many, many years and together with Peter Bardsley, kept the Society going when membership was low.