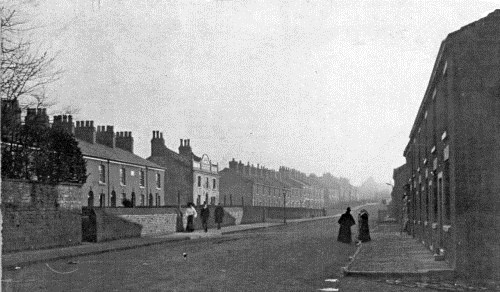 This story is a result of researching the history of the above in response to a request from Christopher White, from Romiley, who now lives in France. William Henry was his gt gt gt grandfather.

William (not Henry then) was born in 1829, son of Jeremiah Chadwick (from Marple) and his wife, Rachel (nee Prosser). The family lived in Compstall Bridge but the children were baptized in Marple Bridge.

During his childhood W 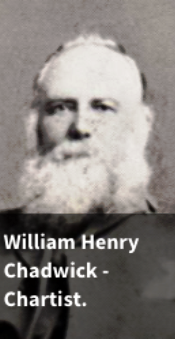 illiam would become increasingly aware of Chartism, the working class movement for political reform which presented  petitions  to the House of Commons, signed by thousands of people. In the North West of England industrialisation had led to terrible conditions and poor pay in mills and factories –even children could be working a 12 hour day.

The petition was presented to Parliament in 1839, 1842 and 1848. Each time it was rejected. Eventually it did become law with the exception of annual parliaments. Apart from some women with property, the rest, as usual, had to wait a lot longer before the suffragettes later took up their bludgeons.

There were Chartist riots in the Marple area in 1842 as part of a more general strike by mill and factory workers. On the 10th August the owner of Shepley mill on the Macclesfield Canal, Hawk Green, Mr Shepley, turned out 500/600 hands at the “request” of the  “mob” (about 200 men). He met the spokesmen on canal bridge no. 4, adjacent to the mill, and must have been sufficiently persuaded to succumb to their demands even though he might not have been sympathetic.   The mill resumed work on the 23rd August. 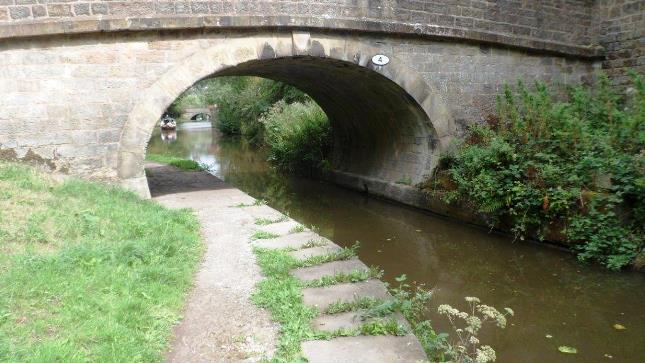 Boatmen were advised not to go further or their boats would be sunk and Top Lock on the Peak Forest canal was damaged, stopping navigation for two days. It has to be realised  that feelings ran high and it is no wonder that bludgeons were a popular means of threat or destruction. At Compstall Mr Andrew, hearing that the mob was coming, stopped the mill before their arrival. Mellor mill was next where Mr Clayton gave a donation of 10s, on condition that the mob left the premises although seemingly the hands also left the mill. I imagine there was much despondency among the people that so little seemed to have been achieved and certainly it was not until 1848 that Chartist activity spread again.

These were minor events compared with the surrounding area as in the hot summer of 1842 the present-day Tameside had become the centre for strikes and riots*. Stockport was invaded by 6-8,000 men waving bludgeons and staves. On the 9th August a march on Manchester was organised and this is where William returns to the story.

By 1842 the Chadwick family had moved to Manchester, his mother, Rachel had died and Jeremiah had become a Town Missionary, later to become City Missionary .The Manchester Mission was founded in 1837 and Jeremiah had been a baker in Compstall so this change of occupation from muffins to missions would necessitate the change of address. William was obviously a confident and precocious boy who, at the age of 14 became a Wesleyan preacher and was lecturing on temperance within two years. Giving lectures would feature prominently in future years although the topics varied.  In Manchester he would be very aware of the Chartists and their demands. 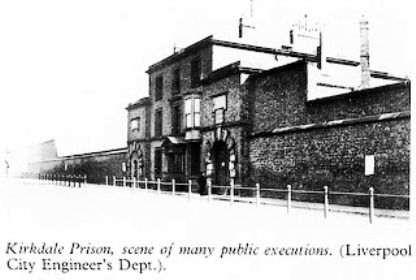 artist although his father was very disapproving. In that year he was one of a group of Manchester Chartists who were tried at Liverpool for their Chartist activities. The description of his arrest reads “Shortly before 5 o’clock William Henry Chadwick, a young man aged 18, who is a mechanic, residing at No. 4 Fletcher Street, was apprehended….at a lathe shop in Fairfield Street. He had in his possession when taken was what he stated was an original MS poem of his own composition” . What, no bludgeon?! He was  imprisoned  for six months in Kirkdale Gaol, Liverpool for sedition and conspiracy as a leader of the Chartist movement. Memories of this time in prison would be recounted in his later oratory days.

From then on William becomes William Henry and with a new name comes a new life.

(Mesmerism:– hypnotism, the presumed magnetic influence exerted upon one person by another, affecting his body in various ways and controlling his thoughts and actions (Mesmer, a German physician who propounded this doctrine.))

The best way to describe William’s life style for the next few years is theatrical!

Census pages give us some idea of William’s life from 1851. By then he describes himself as a scientific lecturer. He is staying at the Temperance Hotel in Pontefact at the time and in 1855 marries Mary Jane Walker in Liverpool . Over the years a number of children appear on the scene, the mother of some being Mary Jane while others have no recorded mother.  By 1861 William is a lecturer on magnetism. Staying with them on that night, of the census, is Alice Ann Riley, a lecturer in phrenology. Her stage name was Annie De Montford. She was  well- known for her Mesmeric Seances so they could have had a nice cosy  séance round the fire that night, mesmerising each other!

Mesmerism, phrenology and magnetism seemed to loom large in theatrical performances in Victorian times and Annie de Montford was well-publicised as a Mesmerist.  There is no doubt that William made his mark too. William and Mary have different occupations on each census or swap each other’s roles. Every 10 years William is in a different town, Gloucester, Cheltenham, Salford, Gorton, presumably taking part in mesmerism productions although by 1891 he is a widower.

Examples of what the theatre-going Victorians and their counterparts in France could expect are as shown here.  What excitement!! 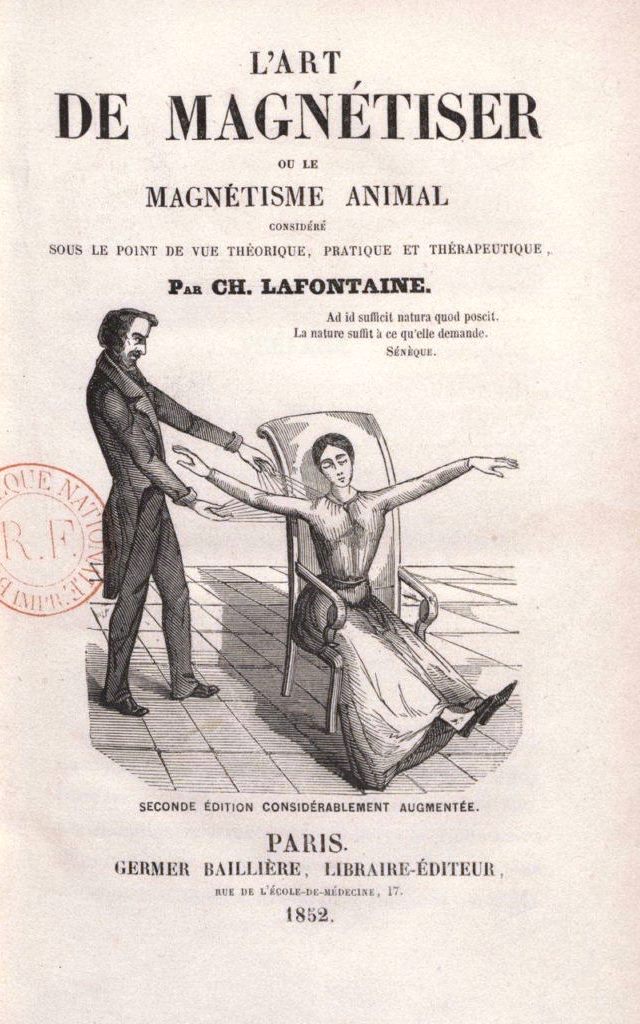 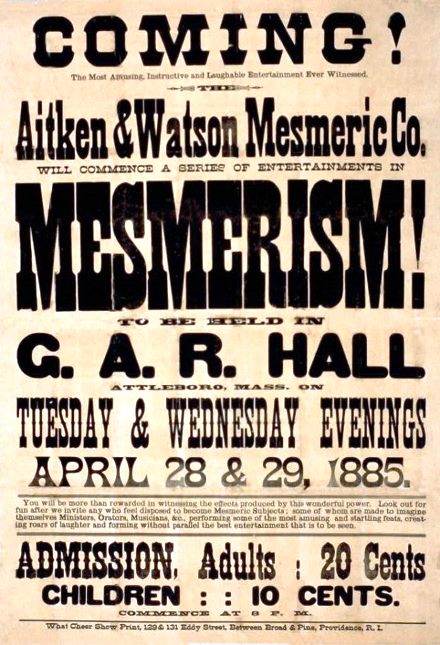 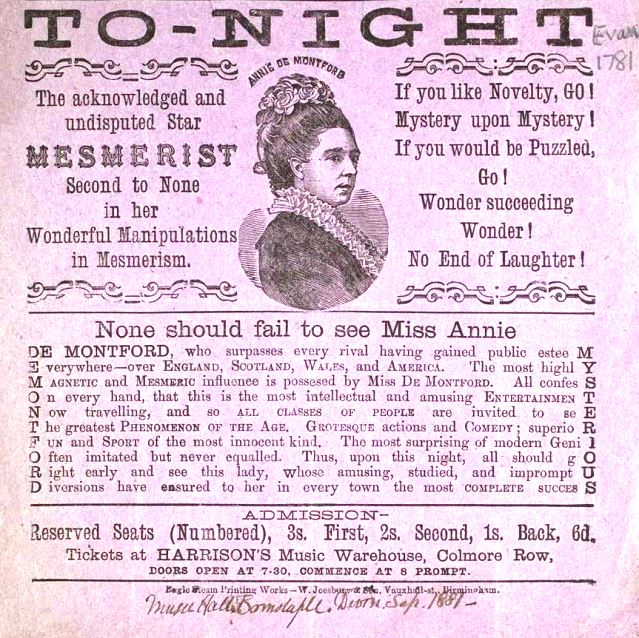 During this theatrical time William retained his Chartist views. There was renewed activity to gain access to Kinder Scout in the 1890’s and it is reported in “ Kinder Scout The People’s Mountain” by Ed Douglas and John Beaty, that William Henry Chadwick 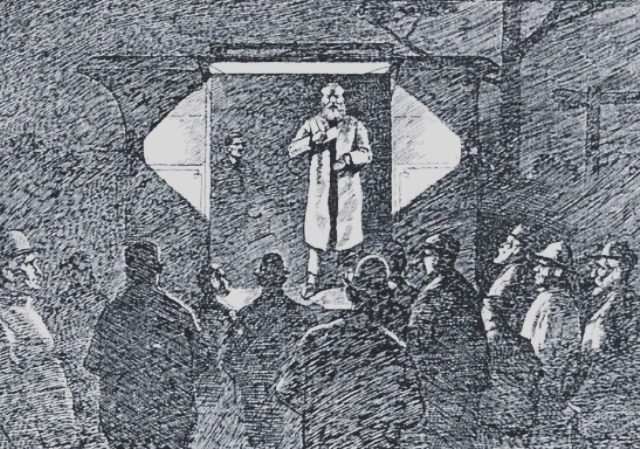 announced he was ready to trespass on the plateau and go to jail again if necessary.  He had returned to politics and helped found the agricultural labourers union. He became a van lecturer for the National Liberal Federation in 1891. Being a van lecturer involved travelling by way of a campaign van and performances were at night when people weren’t at work.

William’s missionary zeal  had never left him and he used this political platform to preach to the audience in his melodramatic way. I cannot do better here than to suggest that readers should read the Google extract of  pages 117 - 120 from “A Life of Strife” by T Palmer Newbould.

Reading about the oratory of William Hernry Chadwick left me mesmerised! 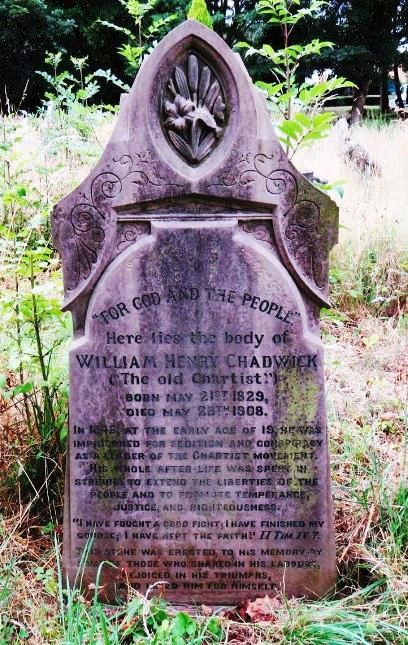 The commemorative plaque  and gravestone (left) are in Willow Grove cemetery, Reddish.

“FOR GOD AND THE PEOPLE”

Here lies the Body of

In 1848, at the early age of 19, he was imprisoned for sedition and conspiracy as a leader of the Chartist movement. His whole after-life was spent in striving to extend the liberties of the people, and to promote temperance, justice, and righteousness.

“I have fought a good fight; I have finished my course; I have kept the faith.”

This stone was erected to his memory by some of those who shared in his labours, rejoiced in his triumphs, and loved him for himself.

The Stockport Advertiser of June 5th, 1908 carried a report on the funeral:

The funeral of the late Mr William H Chadwick, one of the few remaining Chartists, took place at Willow Grove cemetery on Monday, in the presence of a number of relatives, friends and representatives from various political organisations in the district. After a strenuous life in which the old Chartist had taken part in many political battles, it was a singular coincidence that his remains should have been laid to rest in a severe thunderstorm. But so it was; rain fell in torrents accompanied by vivid flashes of lightning and loud peals of thunder as the mourners stood around the grave.

Sincere thanks to Ruth for this excellent piece of research.

References in the article:

**The 19th-century Pseudo-Science trend that gave us ‘animal magnetism’ 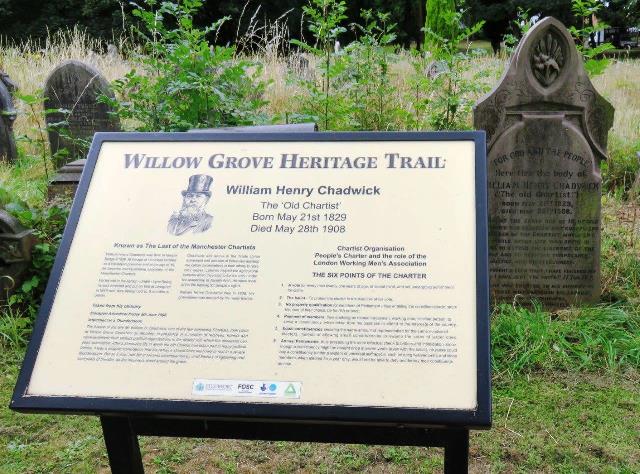 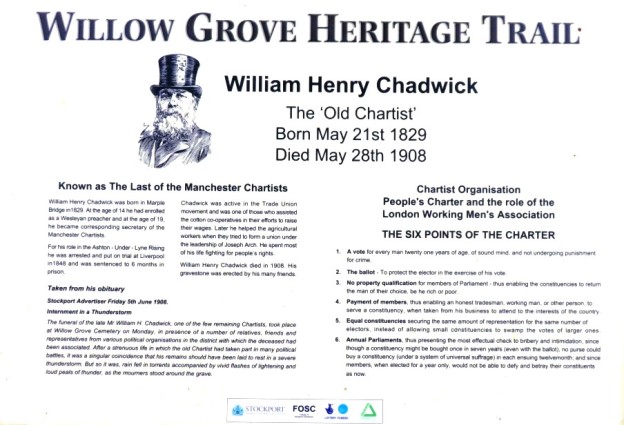