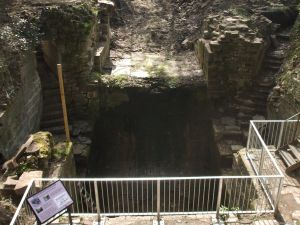 In 1794 the Mellor Mill, Bottoms Mill was opened, six stories, 400feet long, and 33 feet wide the mill was powered by the Wellington Wheel. A breast water wheel 22 feet diameter, 18 feet wide. Power was transferred, from the edge of the wheel to the rest of the mill by vertical shafts. By 1804, 10,080 spindles were operating and up to 550 workers (mainly women and children) were employed. However less than fifteen years later the need arose for a second wheel, and the Waterloo Wheel, was constructed. And in 1860 investement was made in the new form of power, steam, the steam and boiler house.

The following video covers the re-opening of the Wellington Wheel Pit to the public in March 2012, the wheel itself long gone. (Chris Mann, of Manmade productions, produced the video).