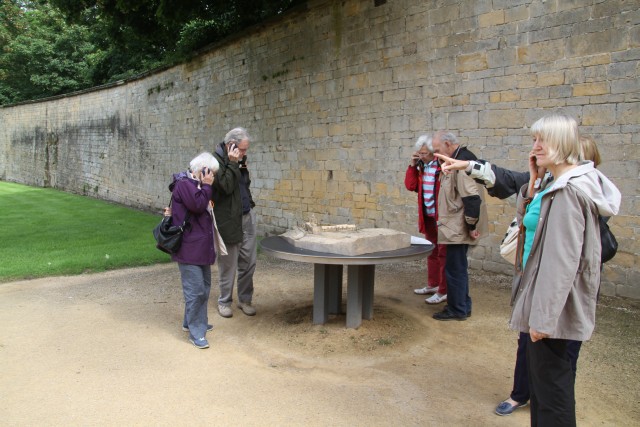 There were deluges in Devon and they were sloshing round Silverstone, but Derbyshire was delightful. A select group clambered aboard a small bus that rattled its way across the peaks. Like our own personal ark it bore us between the showers and storms safe and dry 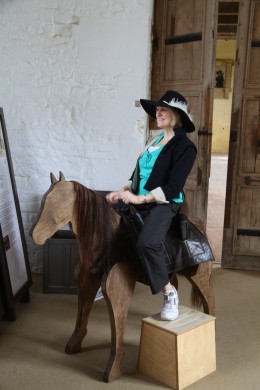 if a little over-heated to Bolsover Castle. After drinks in the café we were provided with neat audio guides which really brought to life the history of the castle. Although part of the castle was now partially ruined, we were able to imagine the parties taking place in the long hall while the servants rushed to and fro below stairs. The venue was very user-friendly: we were able to don costumes and sit on the wooden horse in the stable block where there were also two videos explaining different parts of the castle’s history. From the viewpoint we were able to look left to Hardwick Hall (destination of a previous MLHS trip) and right to the M1, showing the changing face of the countryside. The Little Castle was fascinating, with ornate ceilings and gilded panels contrasting with the drudgery of the bare kitchens where the staff had to work. 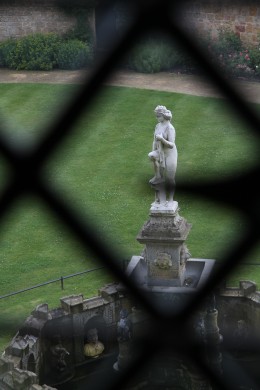 The recent bad weather meant that we were unable to enter the Fountain Garden which was waterlogged and could only be glimpsed through a tiny window, but in any case we’d spent so long listening to the excellent audio guides that it was time to return to the café for lunch. The friendly staff in the gift shop were offering free sample of locally produced jams and chutneys as well as fruit wines.

Another hot ride in the little bus brought us to Heage windmill, gleaming white against the blue sky. The enthusiastic volunteers showed us how the flour is still stone-ground, and we were able to purchase bags of white, brown and wholemeal flour, with which we received not only free recipe leaflets but also free bags of bran. The delicious bread and tea loaves made on our return proved how worthwhile the restoration of the windmill has been.

Our departure time was 4pm and the first drops of rain only fell at 3.50, so we were very fortunate. Our friendly and knowledgeable bus driver brought us home via Bakewell, where we passed the Billerettes at the end of the Bakewell carnival, and Matlock Bath.