The Free Trade Hall did not exist in 1819. The first hall, a wooden building, was erected in 1840 and this was replaced by a stone building in 1857. However, the site was deliberately chosen because of its link with Peterloo and to demonstrate the link between worker's rights, the Anti-Corn Law League and Free Trade. As such it was appropriate to place a blue plaque on the Free Trade Hall to commemorate the events of Peterloo.

One was placed there by the city council but many people felt that it did not do justice to the event or to the struggle of the people who were killed or injured there. 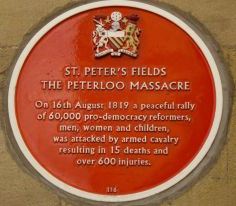 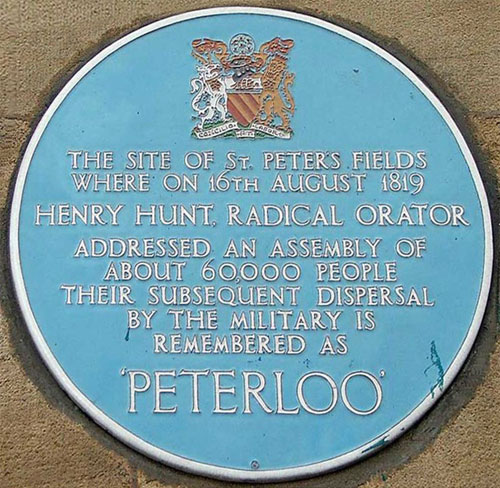 After a well organised campaign the blue plaque has now been replaced with a red one which gives a more precise description of events on that day.The new plaque is red, not as a symbol of solidarity with the Labour Movement but because that is the colour now used to "..celebrate or commemorate events of importance to the social history of the City..".  Blue is for individuals or the building they lived in, and black for buildings of special interest.

However, matters have not ended there. Flushed with success, the plaque protestors are now suggesting that a much more significant memorial should be erected in the area. They are “campaigning for a PROMINENT, EXPLANATORY and RESPECTFUL memorial to this major event in the history of Manchester and its people, and to those who died that day.”

They have set up a website: http://www.peterloomassacre.org/index.html hold regular meetings and ceremonies at the site and have made some headway with the council.

According to the website “Manchester City Council have committed to a new memorial to Peterloo, which will be part of the redevelopment of the St Peter's Square area. The artist's brief is that the memorial should somehow mark other significant Peterloo locations, such as the site of the hustings behind the Free Trade Hall.

No news yet but perhaps all will be revealed when the renovated Town Hall and Library is unveiled.

There is still time for suggestions for an appropriate memorial to be sent to the council.