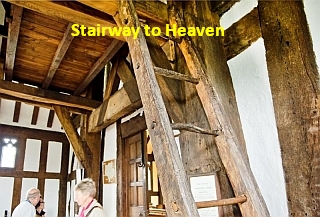 It was touch and go! Judith was still in Iceland two days before our trip but fortunately Eyjafjallajökull behaved itself and there was no need to involve the designated Deputy Leader. First stop on the way to Congleton was Marton in order to see the church – the oldest timber-framed church still in use in Europe.It merits a page in Donald Reid’s “Curious Cheshire” (Published by MLHS, £4) so we were familiar with its unique features–the effigies of the founders, the mediaeval Doom painting on the west wall and the paintings of Aaron and Moses - but it was impressive to see them in substance.

The vicar gave us a fascinating talk on these and some of the lesser known features of the church. He showed the Green Man in one of the windows and explained how the bells now had to be tolled by hand in case the new (17th century) tower fell down. We weren’t too convinced about the Green Man but the tower was rickety enough, judging by the mediaeval ladder that gave access.

His talk ranged wider than just the church. Marton has a very light soil, so light indeed that the weeds almost jump out of the ground. However, it is a rich and fertile soil which could explain why there are so many grand houses within a few miles of the village. He listed them and ran out of fingers. It could also account for what is believed to be the oldest tree in Britain–an oak tree which was already 600 years old when the church 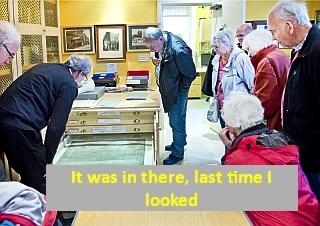 was built in 1343. The family of Mrs Potts, the organist, were living in the village at that time so they could probably vouch for it. Indeed, the whole village was a very close-knit community. As the vicar put it so succinctly, “If you kick one of them, they all limp.” Reluctantly we had to tear ourselves away from his Revelations as coffee was waiting for us in the café next door.

Once this necessary duty had been performed we moved on to Congleton, one of the four charter towns in Cheshire. (The other three are Chester, Stockport, and Macclesfield.) We were given a guided tour of the museum - a little gem. It comprised just one room but they had made the best of this space by concentrating on four themes; pre-history, the civil war, textile industries and WW2 when the Free Dutch Army was stationed in Congleton. The exhibits were beautifully presented, fascinating and, in many cases, valuable. A 14 foot dug-out canoe found in a bog, 18 gold coins found in the wall of a house, 3500 silver coins buried in a local field and a mace used as the model for the more famous mace in the House of Commons. But perhaps the most fascinating exhibit was not in the museum but in a plan chest upstairs in the office. Stored there was one of the most complete collections of charters, mandates and proclamations of any English town.

After the introduction to the museum, Ian Doughty, our guide, gave us a tour of the centre of Congleton.  We began with the town hall, next door to the museum 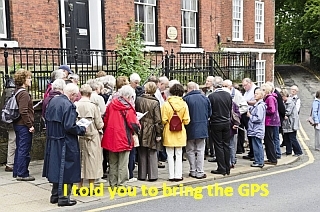 and bedecked with flags in honour of our visit. Built in 1864, it was designed to impress and awe. The relatively small entrance gives no clue as to what’s inside and the winding stairs add to the theatrical experience before the visitor goes into the Council Chamber or the main Assembly Room. Both these rooms are meant to impress - an early version of “Shock and Awe.” The Council Chamber doubled as the court room and the stairs leading from the cells to the dock are a prominent feature. The Assembly Room is even more impressive, now that the false ceiling and plastic lamps installed in the 1960s have been removed.

Much of Congleton is essentially still mediaeval although false fronts on many of the houses and shops disguise this fact. Unfortunately Bradshaw House (Yes, Our John Bradshaw!) was not one of them. The original house has been replaced by an elegant Georgian house although the front could do with a bit of weeding. (Note to East Cheshire Council.) St Peter’s Church was superb. Originally a chapel of ease for the parish church in Astbury, the present building was finished in 1742. Although nothing special from the outside, the interior is superb; a beautifully preserved example of an eighteenth century parish church. And it’s not just our opinion; English Heritage agree with us and, moreover, 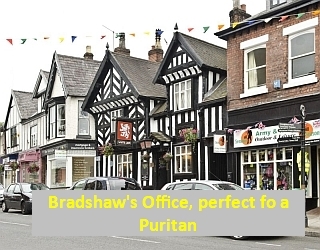 have put their money where their mouth is. The only major change in 270 years is the three tier pulpit has been removed but that has only gone as far as Astbury.

From the church we strolled down Moody Street with its elegant Georgian houses. One of them housed Elizabeth Woolstenholme, an early suffragette who has been largely air-brushed from history by the Pankhursts. Then it was back into High Street and a return to the museum for a final cup of tea and biscuit. It was a very full day in Marton and Congleton so there was no time to visit any more of the venues in Curious Cheshire (MLHS, £4). Perhaps another time to see Mow Cop, Havannah and Old Maggotty, but in the meantime Ian and Judith gave us a memorable day.

Details of Don's book are here on the website

Marton Church both here and here on Wikipedia