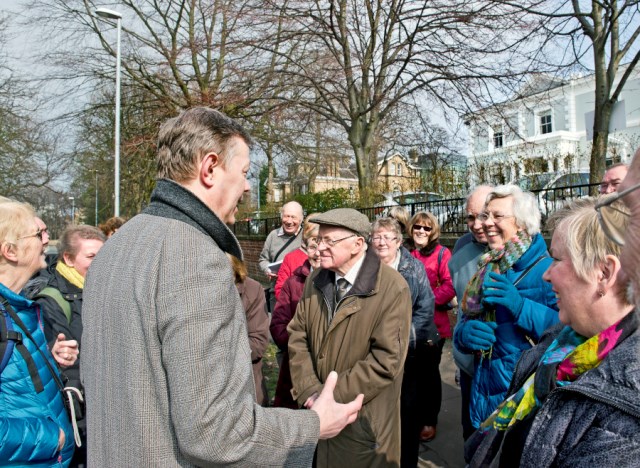 A lonely figure stood at the junction of Upper Brook Street and Hathersage Road. It was twenty five past ten and no one had turned up for the planned day visiting the Victoria Park area. Judith was very nervous. Where was everybody? Was it the wrong day? Suddenly, to her relief, people appeared in droves. What Judith had not appreciated was that no member of Marple History would dream of catching a train before 9.30 a.m. That was when the free pass entitlement kicked in. The 09.38 should get everyone there in plenty of time so that was the vehicle of choice for many people. Unfortunately the 09.38 was late, very late. Nevertheless, by 10.35 Judith had a full complement, and we were off to explore Victoria Park with our old friend and blue badge guide, Jonathan Schofield.

The area began as a specu 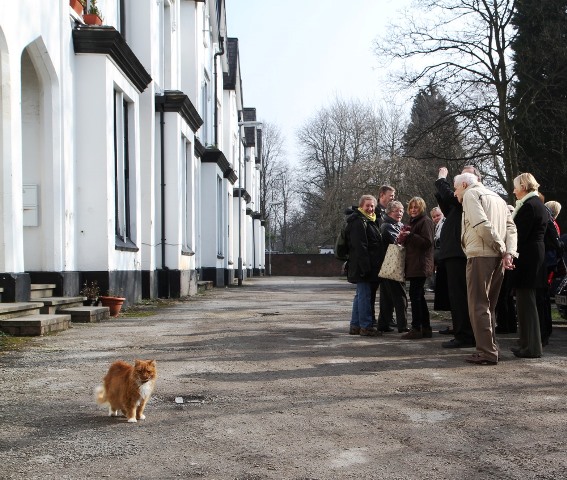 lative venture building villas for the nouveau riche of early Victorian Manchester. In the 1830s it was well away from the smell and the noise and the pollution of Ancoats but still near enough for owners to keep an eye on their investments and to meet colleagues and competitors at the Exchange on Cross Street. The original company went bankrupt as a result of fraud and bad management but its successor company developed more than fifty villas by 1850, many of them designed by prominent architects. Jonathan concentrated on two areas - Daisy Bank Road where some of the most significant villas were located and Conyngham Road which gave a good idea of what the whole area looked like before a variety of infills were built. 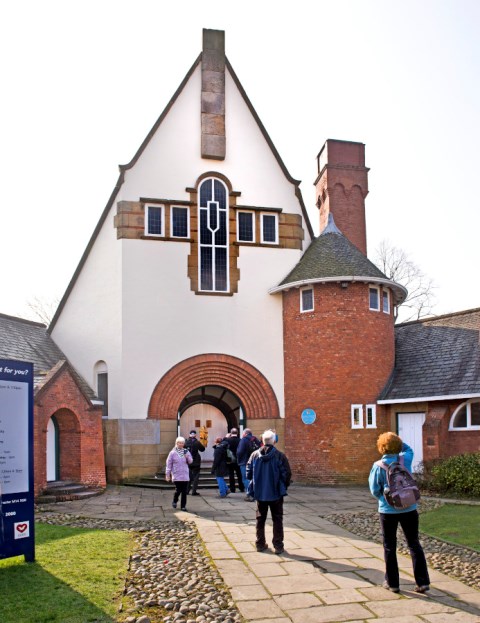 Perhaps the gem of the whole area was the First Church of Christ Scientist, (left) designed by Edgar Wood and now called after him although occupied by the Universal Church of the Kingdom of God. Pevsner described it as “one of the most original buildings of that time in England, or indeed anywhere” and so it was. Part Arts & Crafts, part Art Nouveau, it was at least twenty years ahead of its time. A BT linesman was so keen to listen to what Jonathan was saying he climbed to the top of the nearest telephone pole. Other houses combined a distinctive architectural flair with interesting or notable occupants. Addison Terrace where both Charles Hallé and Ford Madox Brown lived, the villa where Sir Harry Smith (he of Ladysmith fame) commanded Northern District and Buckingham Crescent where the Pankhursts lived. George Hadfield’s house was an informal centre for Manchester Liberalism as well as playing host to small select Chopin concerts. Apparently Ford Madox Brown had a ménage à trois when he lived there but we didn’t pay much attention to such scurrilous gossip.

St Chrysostom’s Church, despite the unpronounceable name, is a classic design by George Redmayne and he was also responsible for Dalton Hall, the first purpose-built hall of residence for students in the country. Other notable educational buildings are Xaverian College designed by Alfred Waterhouse and various halls of residence developed by the universities.

We could have spent hours wa 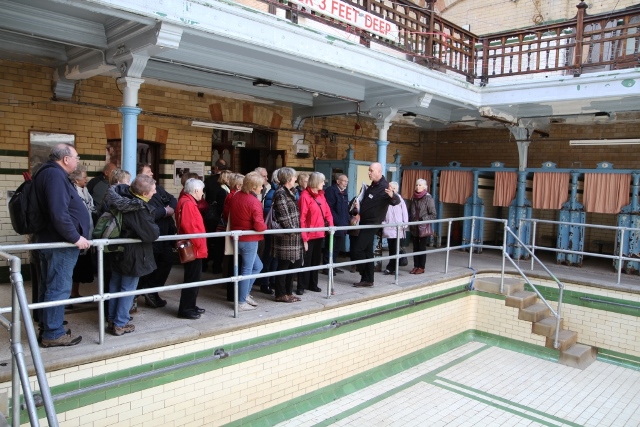 ndering round the area but it was time for lunch and the Victoria Baths. There were three entrances to choose from; “Males 1st Class”, “Males 2nd Class” and “Females”. It seemed pretty straightforward; men on the committee to go in the first door, other men in the second and everyone else in the last door. Unfortunately it seems that Marple History members have no thought for the social niceties; everyone barged through the first door. The lunch consisted of a choice of two tasty soups and a wide choice of sandwiches (at least for those at the head of the queue: those at the back were rather more limited.) The baths themselves were rather grand affairs. None of the “washing clothes and scrub yourself clean” regimen that the numerous other bath houses in Manchester offered. No, these were much more upmarket. The three entrances gave the clue as to how the facilities worked. 1st Class males paid fourpence to swim as long as they liked in clean water and could use slipper baths with unlimited hot water. The 2nd class males paid tuppence and swam in water that had been recycled from the 1st Class baths. If they wanted a slipper bath the supply of hot water was distinctly limited. Finally the ladies (or females as they were referred to) only paid a penny halfpenny. For that the 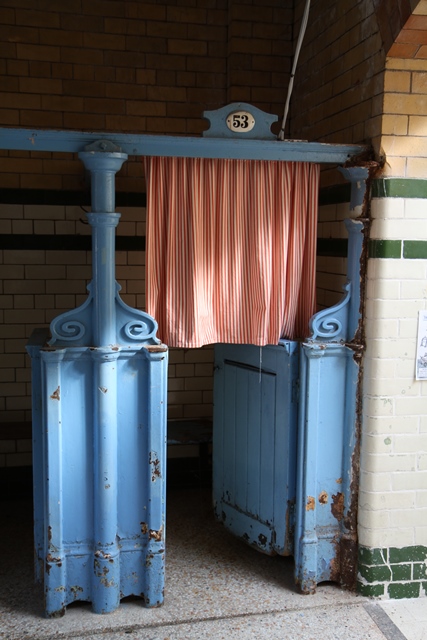 y were allowed to swim in a smaller pool and in water that had been recycled from the 2nd Class pool. Still, it didn’t seem to put anyone off. There were pictures of dozens of girls in swimsuits looking very cheery, despite the recycled water. The Victoria Baths was home to Sunny Lowry, the first English woman to swim the Channel and several swimmers went on to represent England in the Olympics.

The Trust dedicated to renovating the Baths has made considerable progress. They have finished the facade of the building and the roof of one of the pools. Their philosophy is to only carry out emergency repairs until they are ready to do a complete job in any one area. Consequently there are many areas of peeling paint or bulging stained glass windows, all waiting for attention. In contrast, the areas that have been renovated demonstrate a very high level of craftsmanship and promise a very fine building eventually. Since the original BBC Restoration competition in 2003, the Trust has spent £5 million and it estimates another £25 million is needed to finish the job properly. That is a lot of money compared to the £59,000 that the Baths cost originally but the the Trust shows the initiative and the determination to get there.

Our final visit was to Mrs G 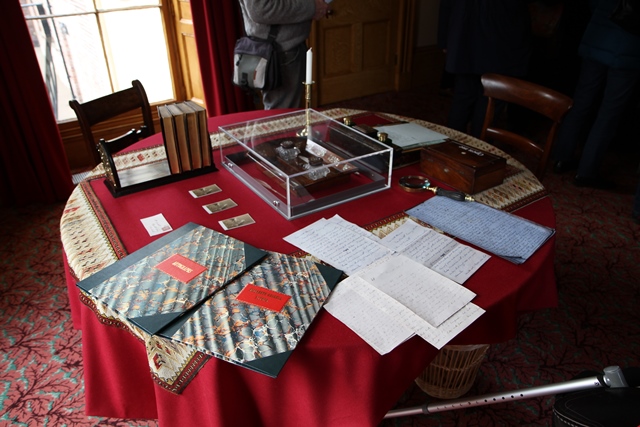 askell’s house on Plymouth Grove, about fifteen minutes away. This was another rescue job. Until a few years ago it was painted pink and gradually deteriorating. Now, with the aid of a substantial lottery grant, it is painted beige, is warm and dry and looks just like the house where Elizabeth Gaskell wrote her books. Frank Galvin (ex-Stockport Museums) is a trustee and he gave us a tour of the house. When they first commenced renovation they brought in a specialist company to strip the paint and wallpaper back, layer by layer. Consequently they can tell with confidence how the house was decorated at various times in its history. They have chosen similar wallpapers and paints to the original and then furnished the rooms in sympathy. Some items have been lent by the Gaskell family or Manchester institutions whilst others have been purchased over the internet. Whatever the source, considerable skill and good taste has resulted in some very authentic room settings. Apart from the entrance hall where visitors are received there are four rooms open on the ground floor. 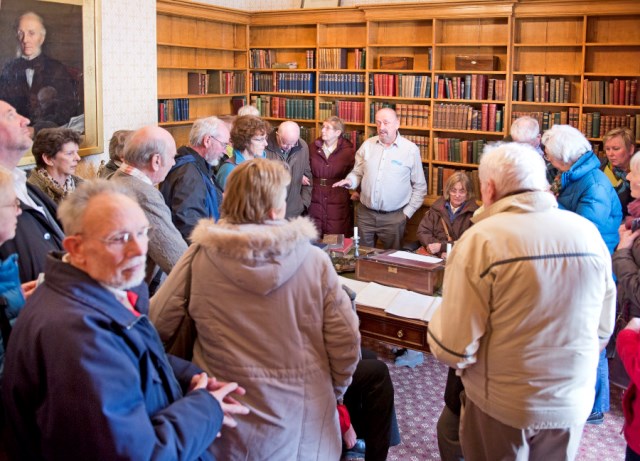 The Morning Room, a bright cheerful room, has a semi-museum appearance with its continuous film explaining the background to Elizabeth Gaskell, two interactive screens illustrating contemporary Manchester and the corrected manuscript for some of her books, and a collection of shawls and photographs that Mrs Gaskell actually used. Next door, the study looked exactly like a study. Here Mr Gaskell, the minister at Cross Street Chapel, did his reading, prepared his sermons, and met his friends and pupils. One of the most prominent Unitarians in the country, he was part of a circle of influential Manchester figures. The Drawing Room was for receiving guests, serving tea and socialising but the most important room for Elizabeth was the Dining Room. Here there was a bay window with a circular table where she could do her writing; both serious writing and social writing as she corresponded incessantly. A country girl at heart, she would sit so that she could see the garden from several angles but it was also a key position to monitor what was going on in the house.

The house is still a work in progress but much has been done. Mrs Gaskell’s bedroom has still to be furnished but the servant area has been converted into a well-planned tea room and some superb toilets. The cakes are delicious and every Marple History visitor was given a ticket allowing free entry for the next twelve months. If you have not been and you know someone who went on this trip it is well worth going, just to sample the lemon drizzle cake.

It was a fascinating day and everything went like clockwork. Judith had a few bad moments when nobody seemed to have turned up but once they had arrived, it could not have worked better. There were even people trying to muscle in on our arrangements. As well as the BT linesman eavesdropping on Jonathan’s words of wisdom, an OAP passing the Victoria Baths decided to join our guided tour. Judith magnanimously agreed.

Let's get together. let's explore !

The interesting, and interested BT lineman (for the county)

Gathering to hear our sage,Jonathan Schofield.

An early sighting of Victoria Baths

Another gathering, the historical conversation continues.

The first view of Victoria Baths, but first lunch.

The exterior of Victoria Baths.

The tour of the Baths reveals all.

Gather round, and hear the story.

The wonder of 19th century tiling.

"Now, who remembered their cossie ?"

Some first class males (and others) emerge after a good session

Time to listen and learn.

A stained glass window, an exhibit of art & skill.

Frank & the table, the explanation.

Time for tea & refelection, and rest.