‘To boldly go where no Society has gone before’ – a noble objective but not true on this occasion. The consultation exercise with the members earlier this year had drawn the suggestion to revisit destinations of yore. So we found ourselves on the way to the Avro Heritage Museum in Woodford. Turn right at Poynton, travel past the airport relief road and enter through the old factory gates. These had given entry to the BAE factory, which closed in 2011, after almost 87 years on the Woodford aerodrome. Houses are being built to populate the site; eventually some 4,000 will materialise. A classic case of changing swords into ploughshares.

Sir Alliot Verdon Roe (above) was an aviation pioneer and the first Englishman to fly an all-British aeroplane. In 1910 he established one of the world’s first aircraft manufacturers, A. V. Roe & Company (Avro) in Great Ancoats Street in Manchester. There is an even more local connection as his mother and brother lived in Arkwright Road in Marple. In 1924 Avro moved production to New Hall Farm at Woodford in Cheshire, and this would later become Woodford Aerodrome. During the Second World War over 3,000 Lancaster Bombers were assembled in Woodford, having bee

n produced in Chadderton, near Oldham and shipped by road to Woodford. In 1963 the Avro factories at Chadderton and Woodford became part of Hawker Siddeley Aviation before being amalgamated into British Aerospace in 1977 and then BAE Systems in 1999. In its lifetime Woodford saw in excess of 20,000 aircraft being built at the facility including such famous names as Anson, Lancaster, Canberra, Vulcan, Nimrod and the BAe146.
Passing through the old factory gates, both the old world and the new world could be seen. The old world appears as the ghostly remains of the factory and the airfield complex. Bases of demolished sheds, rusting reinforcing bars and a runway that lives on, for now, as a series of mounds – torn asunder concrete awaiting expulsion. In sharp contrast the new world appears in the form of houses that are beginning to sprout from the airfield. Driving through this desolation, the museum was finally reached, another new icon standing shiny and proud.
The museum is housed in the fire station of the airfield. Something of a change from the Society’s last visit when it was housed in one of the now demolished factory buildings. As part of the development agreement when it sold the site, BAE Systems agreed to fund a new centre, opened in November 2015. 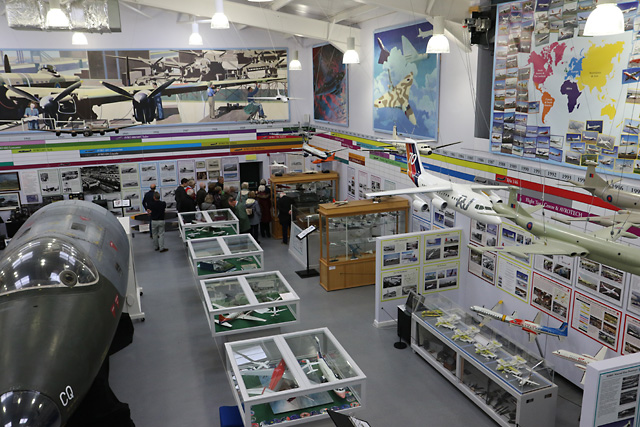 As we filed through the doors, Judith was standing by the reception. Even though I failed to say ‘present’, I was ticked off as such, my last ticking off for the day! Directed upstairs, loitering until all the throng, were present, awaiting further orders. Being the unruly Marple Mob, we were split into two groups, there being ‘safety in numbers’. One group descended the stairs, to explore and to be guided through the exhibition hall. The exhibition's theme, to show the evolutionary history of the company and its aircraft, is 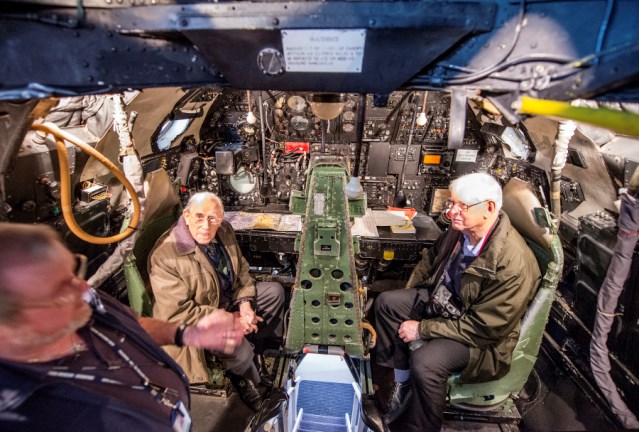 demonstrated by the use of a timeline running along three of the four walls of the exhibition hall. Each aircraft development is in a colour, that is then used to edge the information boards below, thus helping time identification of any board by a mere glance upwards. The hall is also populated by models of the aircraft, suspended from the ceiling by near invisible nylon threads. Additions to the exhibition hall in the near future will include a Lancaster bomber cockpit. When visiting the museum, don't expect a multitude of aircraft for inspection, simulator rides nor for that matter a bouncy castle, but you will have a museum manned by enthusiasts, a wealth of information on the aircraft built and the company which built them. The second group were hard done by, as they had to wait in the upstairs café, and forced to consume brews and cakes. While enjoying these pleasures, four at a time went down to wiggle into the cockpit (above) of a Vulcan Bomber, one of the ‘treats’ of the day. The two groups then swapped their pastimes in the museum. Our thanks must go guides on the tours , and to all the ‘staff’, who were courteous and helpful at the reception, in the café - in fact, everywhere.

An enjoyable morning spent in an almost new museum, full of light and busy volunteers - reception volunteers, café volunteers, archive room volunteers, a hive of activity. What a comparison to the sad demise of the five Lancashire Museums that were closed in October. According the Avro Heritage website…’Avro Heritage Museum relies on funding from a large range of sources’. We can but wish them well with this constant battle to keep the memory of local heritage alive and accessible.

Martin Cruickshank, November 2016, with thanks for David Burridge and Arthur Procter for the photographs, and editor-in-chief Neil Mullineux for advice.