A watery end to the summer strolls. Bugsworth Basin was the destination for 30 or so adventurers on a warm and sunny evening in July, the final summer stroll of this season’s three. Judith Wilshaw introduced us to our guide for the evening, Ian Edgar MBE, (below) the Chairman of Bugsworth Basin Heritage Trust, (formerly the Inland Waterways Protection Society), and honorary Site Manager of 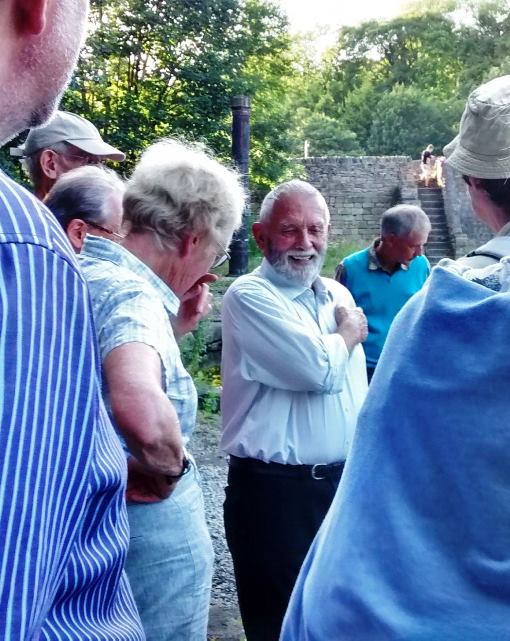 Bugsworth Basin. Ian was the man who initiated the restoration of the Basin, and under his leadership, the IWPS has changed a derelict, weed-ridden hollow into a popular venue for the boating fraternity.

By the late 1790’s work had been completed on the Upper Level of Peak Forest Canal and a tramway built from the quarries of Dove Holes, to improve the transportation of limestone and lime to the rapidly growing industrial areas of North West England. The basin became one of the largest inland ports in the 19th Century system of canals, and remains the only complete example of a canal and tramway terminus in Britain. The complex closed in 1927, as a result of the growing dominance of the railways.

Our evening’s education started in the Upper Basin area. Ian guided us to the area where the tramway reached the site, after its descent from Dove Holes. Gazing at our feet we saw the remaining stone ‘pads’, a forerunner of railway sleepers. Recessed into the ground, these supported the L-shaped three foot long cast iron rails of the tramway. We scuffed shoes on history. Moving on a little, Ian pointed out on the opposite bank the retaining wall in which evidence remains of the system used for unloading stone from tramway trucks ready for loading on to narrow boats for trans-shipment along the canal. We examined the replica of the post of a cantilever jib crane that had once loaded stone onto narrowboats, and then descended into the area of the Middle Basin.

Here we could gaze over the remaining evidence of lime kilns, a grass, foliage and stone mound. Once lit, these 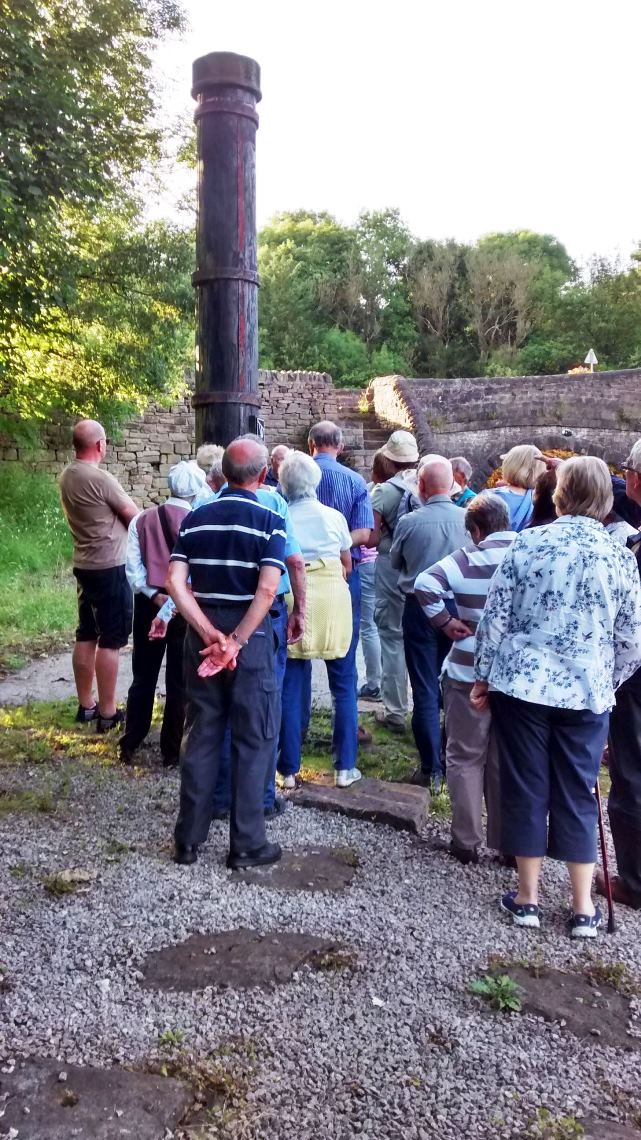 kilns burnt continuously for years, smothering their surroundings with caustic alkaline fumes and dust from lime burning. All turned, and with a short walk approached an open-air model of the basin in its glory days, a scene scarcely recognisable to the modern visitor.

Approaching the lower basin or ‘new drop’ we spotted the lower basin arm, a canal cul-de-sac, which has but four boats moored permanently, a mere token number compared with the past. Nearby could be seen the few remains of the stone crusher building that had stood in the area. For about 50 years, the last owners of the basin, LNER, used the graded stone produced as ballast for their growing rail network.

As Ian guided us to the end of our tour, we crossed over a horse transfer bridge, accessed by ramps to enable the boat horses to get from one part of the basin to another without being unhitched from the boats they were pulling. The horse transfer bridges are a rebuild of the originals, which were demolished in the 1930s. This work was carried out under the auspices of the Job Creation Scheme of the 1980s and early 1990s, a piece of social history in itself.

This took us to the excellent exhibition about the Basin, housed in a shipping container: a very effective improvisation. This was an informative and most enjoyable evening and the weather behaved too! Thanks are due to Judith Wilshaw for the organization and to Ian Edgar for his knowledgeable and enthusiastic guidance round this monument to the heyday of the canals.

Note: The lead image of the basin map is used with the permission of Bugsworth Basin Heritage Trust