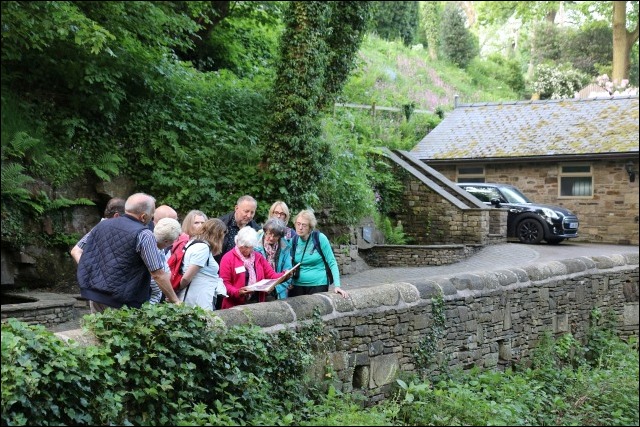 A small crowd of 27 forgo the chance of catching the 18,615th episode of the Archers, to hear of and explore the everyday story of other country folk, who experienced the first rumblings of the Industrial Revolution, and whose descendants lived through its high point and beyond.

Before the gathering broke into two groups, Anne O’Mara, the Blue Badge Guide for the evening, gave an outline of the history of the area that lay in the view before us. The 10,000 year old hilltop  site of a Mesolithic Age fort on the opposite side of the valley; the 13th century Corn Mill that gave the area its name, in the depths of the valley;  how the area was part of the Royal Hunting Grounds of Peak Forest, during the Medieval era; Ludworth Corn Mill  serving the needs of the scattered farms in the area.

Intense industrial development in the late eighteenth century transformed the valley, with the building of four cotton mills located on the Mill Brook - Primrose Mill, Clough Mill, Hollywood Head, and Holly Vale Mill. Of these, only Primrose Mill has survived and remains a working concern. Other industries, such as coal mines, quarries and brick works populated the area - a noisy, dirty area during this period of its history. Prosperity was followed by decline in the late 19th Century.  In the census of 1881 of the 383 houses in Mellor, 110 were 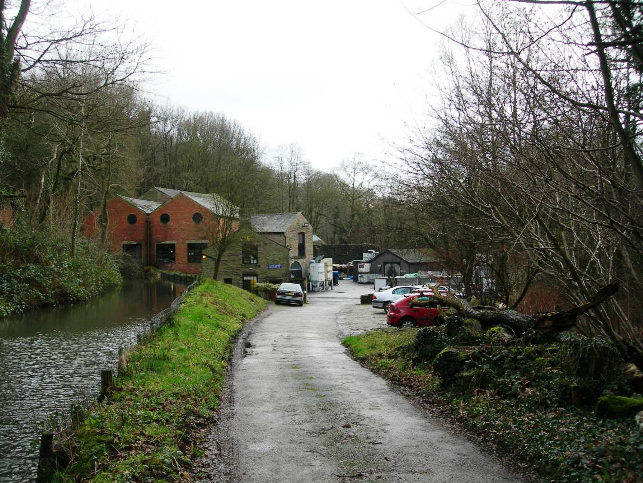 uninhabited, the population halved in the next ten years. During the latter half of the 20th century prosperity returned; the effect of commuting households, and ramblers with increased leisure time, a pair of new boots and disposable income.

With the division of our party into two, the groups went on their own separate ways.  One group, Anne O’Mara’s, starting with the cruck barns of Pear Tree Farm, whilst the second group led by the badge-less and sometimes clueless author of this report, descended to the Corn Mill. On the way to the next stop, Primrose Mill, we spotted that the nearby Greenhill house was for sale, a former farmhouse rebuilt by John Stanney, founder of Primrose Mill.  As this group reached the Mill, we met the present owner, councillor, Annette Finney. Annette kindly gave a rundown on the products of the Mill in the 21st. century, before locking the gate for the evening. The north face of the valley was now climbed up to the Primitive Methodist Church.  The stroll encompassed mill sites, a mixture of workers houses that line the road through the hamlet, and those of the owners of the mills. The one remaining pub, the Hare and Hounds,  possesses a car park that was once a quarry, and in the Second World War boasted a sign “CLOSED-NO BEER”, to save something for the regulars to sup, during the working week.

The highlight of the evening was undoubtedly the visit to two gardens in Mill Brow, one connected with both religion and agriculture, the other with the spinning industry that changed Mill Brow so radically.

A cruck-framed barn, with rubble walls, and stone slate roof lie within Ian & Sue’s garden at Pear Tree Farm. Six crucks form what may have been two buildings; they were much altered in the mid-20th century. This is a Grade II listed structure along with Ian & Sue’s farmhouse, with datestones ‘DN 1705’ above the door and ‘1 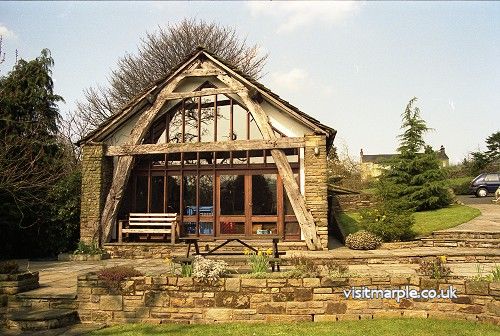 672’, to the rear. The community at Mill Brow has strong associations with the history of non-conformist religion. As early as the seventeenth century, dissenters were holding services in the old barn at Pear Tree Farm, whilst Sun Hill Farm to the north is mentioned as having a Methodist Society in 1742.

The second garden visited belongs to Jon & Mair. They are fortunate to have the remains, of Holly Vale Mill in their garden, covered with shrubbery, waiting to be re-discovered, and not listed, grade anything. Established in 1803, it was owned by four generations of Ratcliffes until production ceased circa 1900. Originally used for spinning, candlewick making was added in the mid-19C with bleaching added circa 1875. The works buildings straddled both sides of Mill Brook. At the height of its operation in 1881, Holly Vale Mills employed 166 workers and 7 foremen.

We enjoyed these gardens so much more than the RHS ones in Chelsea,  which were on the television that evening. But that could be a biased opinion.

De-briefing was held over the ale of the Hare & Hounds, the close of a very enjoyable summers evening.

My personal thanks must go to Anne O’Mara for her guiding on the evening and to both her and Ann Hearle for the cramming course on Mill Brow’s history.

By the Corn Mill