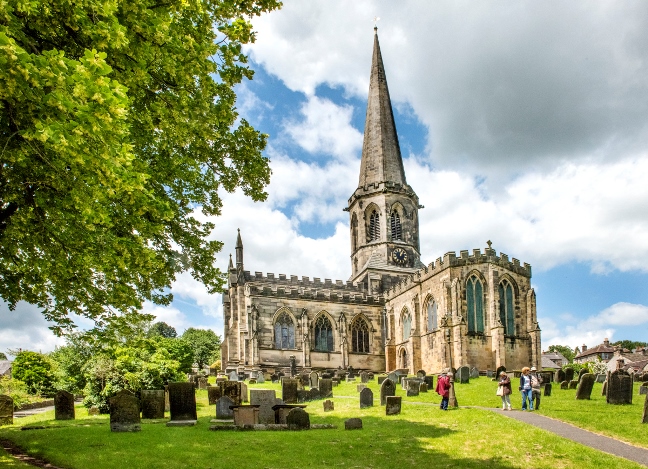 At 9:15am on Sunday 7th July a party of 24 left a rather cool Marple and headed for Bakewell where, after a 25 mile drive, we were greeted by Mike Hillam at the Old House Museum with a welcoming drink of tea or coffee, by the full scale model of the Lumford Mill waterwheel. (below) The clouds quickly dispersed and the day rapidly turned into a scorcher. 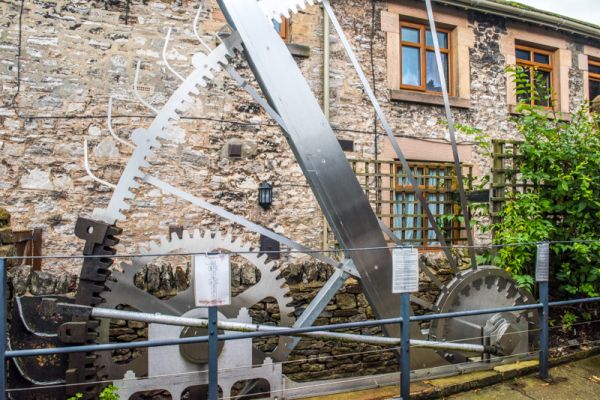 We were split into two groups lead by Michael and Mandy and taken on a tour of the house lasting approximately one hour.

The museum is in what is thought to be the oldest house in the town and was originally built as a Tithe Collector’s cottage for the Dean and Chapter of the Lichfield diocese and is constructed of limestone with gritstone quoins. Tithes were known in Latin as ‘parsona’ so the collector was known as a ‘parson’ and this house, in addition to being known as ‘The Old House’, is also called ‘Parsonage House’. The collection of these tithes became increasingly fraught and so in 1534 the Dean and Chapter leased the task to Ralph Gell and paid him from the proceeds. Ralph Gell lived at Hopton Hall near Wirksworth and was a prominent lawyer and land owner and in 1549 he bought Parsonage House. He extended the property to the south by adding a two-storey extension with a parlour and parlour-closet separated by a wattle and daub screen on the ground floor and a main bedroom and servants’ bedroom above also separated by a wattle and daub screen. Both floors had fireplaces. Ralph Gell continued to prosper from both tithe collecting and agriculture and he embarked upon a further phase of building work in about 1549. This time the extensions were to the north and comprised a large hall with a great fireplace, a buttery and a kitchen on the ground floor and large bedroom (above the hall) with a garderobe and other rooms on the first floor. Ralph Gell died in 1564 and the house was passed to his three sons and then to his grandson John who, it is thought, add

ed a further two storey bay to the east. During the turbulent period of the Civil War John’s sympathies initially were with parliament but eventually he converted to the King’s cause and after the Restoration he moved to London where he was knighted and became a Gentleman of the Bedchamber.

Following his death in 1671 the fortunes of the Gell family slowly declined. Tithes had depreciated in value and Parsonage House was becoming outmoded and the property was leased to a succession of tenants. In 1796 it was purchased by Richard Arkwright who created five dwellings by erecting internal partition walls and sealing off the garderobe and the great fireplace. These rooms provided secure accommodation for employees in his Lumford cotton mill, Bakewell. In the 1860s the house was purchased by the local Workhouse Manager Edward Cunningham who renamed it ‘Cunningham Place’ which remains its postal address today. The individual dwellings continued to be occupied up to the early 1950s at which time Bakewell Urban District Council considered that they were unfit for human habitation and served a Demolition Order on the whole property. The owner at the time was Mr. T N Harrison, who was a chemist with a shop in Rutland Square in the middle of the town. Charles Bradbury, a local builder did some exploratory work and uncovered the great fireplace and the garderobe and Mr Harrison’s agent, John Marchant Brooks started a campaign to save the building. He received support not only from local people but also Sir Nicholas Pevsner and the Demolition Order was cancelled. The campaign was also instrumental in the formation of The Bakewell and District Historical Society to which the Harrison family passed the property.

In the sixty years since the Society took over the property it has developed into a museum, not just limited to local history and archaeology and each of the rooms has a theme; whether it’s textiles, pottery, bygones or whatever and there are ‘Can you find it’ trails for children (and adults too if they wish !) It is open from 11:00 am to 4:00 pm every day and the entry ticket is valid for repeat visits for twelve months. 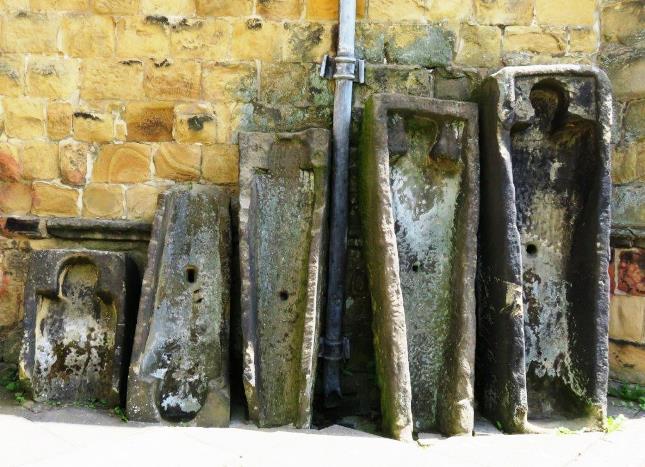 Following the visit to The Old House, Judith led the party down to All Saints’ Parish Church. There was a church on the site by AD800 but the basis of the present church was built by William Peverel , the son of William the Conqueror, in around 1110. It is built in the Norman style with a north and south aisle, an apse and short transcepts. There is a remarkable collection of Saxon, Norman and early medieval stones and crosses in and around the church, a jumble of ancient stone carvings in the porch, and just to one side a group of five early medieval stone coffins.

Their dates, origins and purpose are disputed but nevertheless they are fascinating!

Throughout the 13th and 14th centuries many alterations took place. The aisles were widened, the chancel was extended, the Norman arches were replaced with those of the rounded English style and a south porch was added. As the years passed, further alterations were made including changes to the windows, the addition of buttresses to strengthen the walls, a new floor made from encaustic tiles, changes to the wood carvings and pews and the late 1800’s, a new altar deigned by Gilbert-Scott. It is a fascinating building and an excellent guide is available for £2.00. 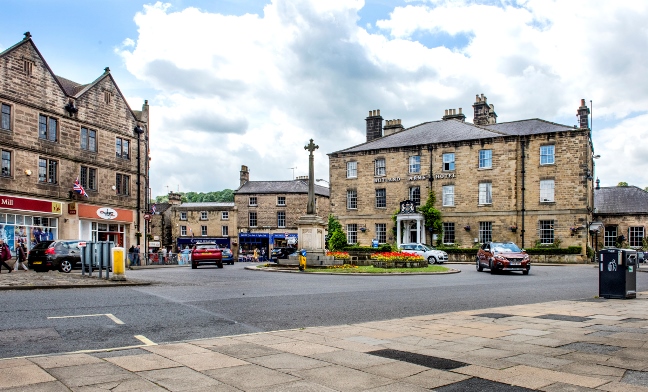 We then walked down into the town where we had lunch, did some shopping, ate ice-cream and fed the ducks until we re-convened for a mini-tour with Judith. She pointed out various buildings of historical interest. Several of these were built as a result of the rivalry between the 5th Duke of Rutland (of Haddon Hall and Lord of the Manor of Bakewell) and the 5th Duke of Devonshire (of Chatsworth and Lord of the Manor of Buxton). In the early 1800s the Duke of Rutland attempted to develop Bakewell as a spa town to compete with Buxton. To this end he re-aligned streets, replaced timber framed houses with stone ones and created Rutland Square. 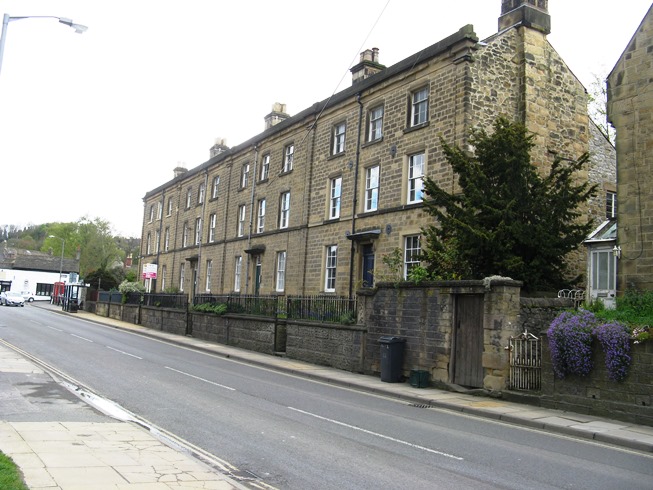 A particularly attractive feature of this work is the botanical gardens known as Bath Gardens, and he replaced the White Horse Inn with the elegant Regency ‘Rutland Arms’ where Jane Austen stayed in 1811, and is reputed to have based ‘Lampton’ of Pride and Prejudice on Bakewell.

However, the highlight on this mini-tour was the visit to Victoria Mill, just off the A6 on the Stockport side. It was built around 1810 and was a corn mill until the 1940’s when it was used as a warehouse. Subsequently, it has been turned into apartments. The leat, sluice and wheel-pit are all there to be seen together with the a cast iron water wheel which is in surprisingly good condition – apart from the absence of any buckets. Following a rough attempt to measure the width of the wheel (using Arthur Proctor’s arm span) it was apparent that it didn’t originally come from Victoria Mill, so where is it from, how was it transported and by whom ?

We left Bakewell shortly before 5:00 pm and took the scenic route from Ashford via Monyash, Buxton, Long Hill, Whaley Bridge, New Mills and Strines, arriving at Marple at 6:00 pm.

Footnote: Lumford Mill>> "In 1777 Richard Arkwright, leased a stretch of land next to the River Wye to Philip Gell of Hopton. He built Lumford Mill, which was a historic cotton mill in Bakewell at the time, but it caused much trouble and strife. It has a very chequered past, and it's a story with a very dramatic ending. "

Thanks to Rod Shreeve for his account of the day, to Jackie Collins for acting as Deputy Leader, and to Bill Beard and Arthur Procter for the photographs.